This article is about the 16-story downtown tower. For other uses, see Empire Building (disambiguation). 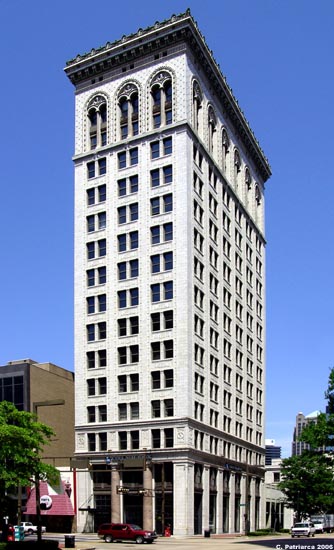 Photo from the southeast across 1st Avenue North 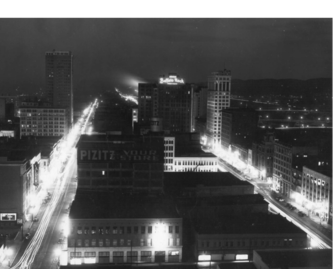 The Empire Building is a 16-story, 247 foot tall classical revival style skyscraper at 1928 1st Avenue North on the northwest corner of its intersection with 20th Street. It was erected on the former site of the Bank Saloon in 1909. When it was built, it was the tallest building in Alabama. Within four years that honor was passed to the American Trust and Savings Bank Building on the opposite corner, creating what became known as the Heaviest Corner on Earth.

The Empire Building was developed by the Empire Improvement Company, which was headed by Robert Jemison Sr. The construction was financed in part by a mortgage loan from the Metropolitan Life Insurance Company, the first such deal made by an insurer for development.

Though local architects William T. Warren and William Leslie Welton are usually credited with the design, it is more likely that J. E. R. Carpenter of the New York firm of Carpenter & Blair acted as the lead designer with Warren & Welton, young architects who arrived in Birmingham in 1907, as associates supervising the details of construction. (Alexander-1986) There were 19 bidders for the construction contract, which was eventually awarded to the Thompson–Starrett Co. of New York, represented locally by superintendent Frederick Larkin.

The entire facade is executed in molded terra-cotta. The 1st Avenue entrance is flanked by monumental pink granite Doric columns. The arched niches above the paired windows in the upper story feature sculpted busts of allegorical figures. Larkin (as Frederick the Great) and Welton (as Emperor William) appear among them. The elaborate and colorful cornice features a repeating shield motif of large white capital "E"s, representing the developer. Interior finishes included Italian marble and mahogany. Services included in the building when it opened included hot and cold running water and a central vacuum system.

The construction period was documented in monthly photographs by the Birmingham View Company. The foundations had been set by January 15, 1909. Union ironworkers from Local 92 provided skilled labor for the building's 50' x 100' x 192' steel frame, which was completed in 23 days. The first column of the 16th floor was in place in mid-March. By May 15 the terra-cotta cladding was installed, and a month later visible construction was nearing an end. Harry Lesher was appointed building manager in 1911.

On January 30, 1917 a crowd of thousands assembled in the streets to witness Harry "The Human Fly" Gardiner climbing the exterior of the Empire Building. A photograph from the event shows a Greene Drug Company, a Rexall-affiliated pharmacy, occupying the ground-floor corner location, Richter Co. Tailers on the third-floor, and the offices of the Birmingham Motor Speedway Company on the fourth floor. A 1934 ad claims that the Birmingham Firemen's Relief Association located in the Empire Building because of its convenience.

In the 1950s a illuminated sign for Buffalo Rock was located on the roof of the building.

In 1982 the Empire Building was added to the National Register of Historic Places. Until the demise of Colonial Bank in 2009, the financial institution had a branch on the ground floor of the building. With its closing the tower became vacant.

In 2012 investor John Tampa of Georgia-based Ascent Hospitality purchased the building, with the intent of redeveloping it as a boutique hotel. Financing opportunities instead led him to propose low-income apartments for the property. In November 2014 the website of New Orleans, Louisiana architects John T. Campo & Associates, suggested that the building would be converted into a Marriott Autograph Hotel. That suggestion was confirmed in April 2015 with Ascent's announcement of a 117-room luxury hotel in the Empire and a 120-room limited-service Marriott hotel in the nearby Alagasco Building. A new restaurant for the project is being developed by chef Chris Hastings.