This article is about the Birmingham community. For other uses, see Ensley (disambiguation). 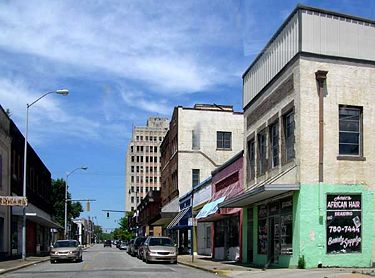 Ensley in 2010. Photo by Chris Patriarca

Ensley is a large community located in Opossum Valley in the western section of Birmingham. It is named for its founder and promoter Enoch Ensley and was home of the mammoth Ensley Works operated by the Tennessee Coal Iron & Railroad Company (a division of U. S. Steel after 1907). Originally independent, the city was annexed into Birmingham in 1910. The closing of the Ensley Works triggered a general decline in the area after the 1970s. Ensley's downtown has staged several attempts at revitalization, but remains largely vacant. 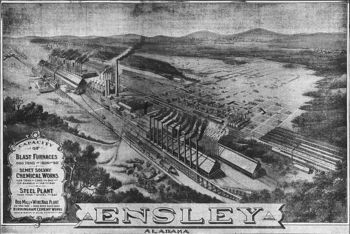 Colonel Enoch Ensley acquired significant property in Jefferson County in the early 1880s by purchasing the Pratt Coal and Coke Company, the Alice Furnace Company, and the Linn Iron Company. Joined by Afred Shook and T. T. Hillman, he was able to effect a merger with TCI which made him president of the company on December 8, 1886. It was on TCI's behalf, then, that Ensley began laying out what he planned to become "the great industrial city of the nation".

Located at the southern edge of the Pratt Coal Seam, near the waters of Village Creek and adjacent to the trackage of the Lousville & Nashville Railroad, Ensley considered the site perfect for a center of iron and steel making and manufacture. He compared the potential for utilizing the available resources to "a brindle cow sucking herself" and confidently named the new city for himself. In order to capitalize on the land-rush that was sure to accompany TCI's industrial developments, he incorporated the Ensley Land Company with partners Thomas Radcliff, Hillman, and William Walker Jr. TCI purchased 4,000 acres from Ensley and the company proceeded to survey and plat a grid of streets adjoining the proposed plant site.

Newport, Rhode Island sanitary engineer George Waring, Jr was contracted to coordinate the street layout with separated storm and sanitary sewers, an innovation which he had brought previously to Col. Ensley's native Memphis, Tennessee from Europe. A passenger streetcar, the Ensley Railway, connected the new city to Birmingham in 1887 and the Ensley Hotel was constructed to host visitors and prospective investors.

Construction of the Ensley Works, with four huge blast furnaces being erected simultaneously, began in 1888. The last of the four went into blast on April 4, 1889, completing what was, at the time, the largest group of steel furnaces in the world. Despite the auspicious start, however, a series of setbacks retarded the growth of the new enterprise. Colonel Ensley was summoned to England where his wife was seriously ill. He put the land company's business on hold while he tended to her. Before he returned, a financial panic greatly reduced the prices being paid for pig iron. The land company was forced into receivership and its property auctioned off for $16,000. 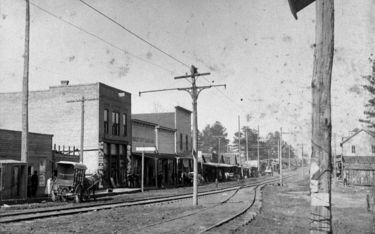 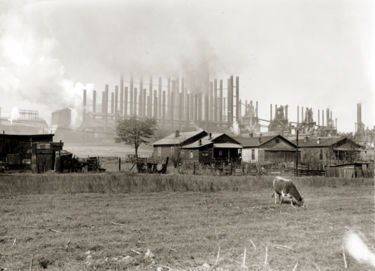 View of worker's housing and the Ensley Works in 1937

Erskine Ramsay and Paschal Shook took the lead in reorganizing the land company in 1898, and it was not until that year that the first lots were officially sold. Meanwhile furnace production increased with the adoption of the open-hearth method and other industries began to construct plants in the area. Among the new operations were the Semet-Solvay Company's coke by-products plant, the Birmingham Cement Company, the Alabama Steel and Wire Company and the Ensley Brick Company, many of which used by-products from TCI's steel operations in their work. Two new blast furnaces were installed in 1904 and 1906, greatly increasing output.

The rapidly-growing industrial development of Ensley produced a sharp demand for workers' housing and retail shops and services, as well as churches, meeting houses and schools for their families. Before 1898 only a few cottages and a small row of commercial buildings had been erected. That year saw the construction of over 400 new houses built in tandem by TCI and the Ensley Land Company. The new city was formally incorporated on February 12, 1899 with Nimrod Scott as Mayor. By 1901 there were more than 10,000 residents living in and around Ensley. By 1910 the U. S. Postal Service estimated the community's population at 20,000 to 25,000.

The new city built a multi-purpose Ensley City Hall in 1900 and a Carnegie-funded library in 1906. Other new institutions included Bush School, Ensley First Methodist Church, Ensley High School, and Minor School, all constructed between 1901 and 1910. That year TCI began developing a new steel plant just beyond Ensley in Corey (soon renamed Fairfield). The Ensley Land Company, which was bought outright by TCI in 1899 began building larger houses for plant supervisors and mechanics in the southwestern edge of town nearest the new development. Other larger homes were built along Pike Road and in Ensley Highlands on Flint Ridge.

Despite local opposition, the then-thriving new city was annexed into Birmingham under the Greater Birmingham legislation which took effect on January 1, 1910. Before the bill was passed, a movement to annex Pratt City into a "Greater Ensley" as a bulwark against future annexation into Birmingham was publicized, but to no avail.

Residents of Ensley held a mock funeral for their "dead" city and laid a tombstone which sat for two years outside the real estate office of J. R. Perkins. The annexation did not slow development of the community, however, as new mills and businesses continued to sprout up. The Birmingham Tidewater Railway Company began running trains between Ensley and East Lake, spurring streetcar-related developments along the entire 14-mile route. Additional residential districts were developed at Tuxedo Park, Sherman Heights. The northeastern section of the city, clustered around St Joseph Catholic Church, became home to numerous Italian immigrant families and was called "Little Italy".

Neither did the annexation remove Ensley's sense of itself as the community continued to promote itself as having a "backbone of steel" and a bustling downtown which drew shoppers, diners and dancers from the whole west side of the county. A 1926 silent film, Men of Steel was filmed in Ensley and premiered at the city's Franklin Theatre. In 1929 Erskine Ramsey and partner Carr McCormack replaced the small Bank of Ensley with the towering 10-story Ramsay-McCormack building at the heart of the city's business district. Tuxedo Junction, an area where several streetcar lines crossed, became a well-known entertainment district, made world famous by Erskine Hawkins' 1939 hit tune of the same name.

The Great Depression hit Birmingham harder than any other city, and hit Ensley harder than the rest of Birmingham. John Beecher wrote a poem entitled "Ensley, Alabama, 1932" which ends, "where the ladle poured at the pig machine/ the deep smoulder of an iron run/ and the spreading light/ of molten slag over the sleeping town/ are seen/ no more/ now mills and men are down."

The furnaces burst back into operation as demand for steel increased in advance of World War II. After the war, though, many workers moved away from Ensley, able to afford new suburban houses and to get to work by automobile. Downtown Birmingham vied with the suburbs to attract shoppers from a wider area with lavish commercial displays. Downtown Ensley never resumed the bustle of the 1920s. Over the course of the next decades U. S. Steel concentrated its operations at the Fairfield Works and eventually shut down the Ensley Works in stages between 1975 and 1979.

In 1970 Ensley had more than 18,700 residents. By 1990 that number had declined to 5,976. The 2009 estimate for the area's population is 4,032. Over that period numerous "revitalization" efforts have been made, with marginal success. The redevelopment of the Tuxedo Court Housing Project into Tuxedo Terrace and of the nearby Alabama State Fairgrounds into Fair Park in 2010, along with renewed efforts by Main Street Birmingham and business groups to bring investment to the Ensley Business District give current residents hope for improvement. Long-range plans to transform the former Ensley Works site into an industrial park would accelerate economic recovery in the area.

While Ensley was an autonomous city (1899–1909), it operated under a mayor-alderman form of municipal government.