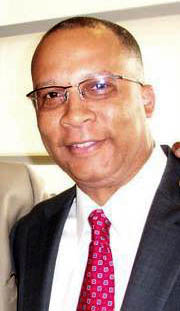 Everett W. Wess is a criminal defense attorney and managing partner in The Wess Law Firm in Irondale.