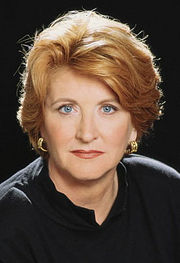 Fannie Flagg (born September 21, 1944 in Birmingham) is an author and actress.

Flagg was born Patricia Neal to Bill and Marion Neal and yearned for the spotlight at an early age. Since her father and grandfather were both projectionists, she grew up around movies and learned to operate actual spotlights. She wrote and staged a play called "The Whoopee Girl" when she was eight years old, but got in serious trouble for using the word "martini" in the script. She started working with the Town and Gown Theatre, first as a spotlight operator, then as an actress, when she was 15. Her stage debut was as an old lady in "On the Town." She joined the actor's guild at 18 and adopted the stage name "Fannie Flag" to distinguish herself from the screen-actress Patricia Neal. Her grandfather suggested the first name, and her friend Mary Hurt came up with the surname.

Neal entered seven consecutive Miss Alabama pageants (winning "Miss Congeniality" in the seventh). She started writing sketches and doing slapstick weather reports for local television while still a teenager and quickly earned her own time slots doing commercials, promotional events and introducing movies. After graduating from Ramsay High School she became well-known to the Birmingham public as co-host of WBRC 6's "Morning Show" with Joe Langston and Tom York in the 1960s 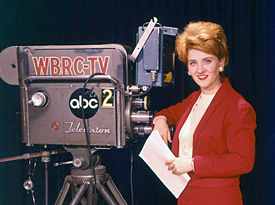 In 1964 she was hired as a staff writer for Allen Funt's Candid Camera and gradually, because of her Southern charm and biting wit, began to appear regularly on game shows such as the Match Game and Password. She also recorded two full-length comedy albums on major labels. She made her screen debut as an actress in Bob Rafelson's 1970 film Five Easy Pieces and later served as his guide to Birmingham when he made Stay Hungry in 1975. She also had small parts in Rabbit Test, Grease, and the television show Wonder Woman.

In the 1980s Flagg turned seriously toward writing. Her first novel Coming Attractions was published in 1981. It was followed six years later with the break-out 36-week New York Times best seller Fried Green Tomatoes at the Whistle Stop Cafe, which was nominated for a Pulitzer Prize. She adapted the story, which was inspired by her memories of the Irondale Cafe, into an Oscar-nominated screenplay for the hit film Fried Green Tomatoes (1991). Since then she has published a series of well-received novels for Random House. Flagg was awarded a star on the Alabama Walk of Fame in 1989.

Flagg has spoken publicly about her struggles with dyslexia and her continuing difficulty with spelling which kept her from pursuing writing seriously for a long time. At one time, Flagg was linked in the press (and reported to have been married) to actor Dick Sargent, who, prior to his death in 1994, revealed that he was gay. Flagg has been open about her own homosexuality after being outed by long-time companion and fellow novelist Rita Mae Brown. Flagg divides her time between homes in Alabama and California.