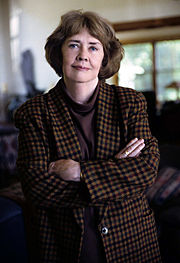 Gail Kathleen Godwin (born June 18, 1937 in Bessemer) is a novelist and short story writer. She has published one non-fiction work, two collections of short stories, and eleven novels, three of which have been nominated for the National Book Award and five of which have made the New York Times Bestseller List.

Godwin was born in Bessemer to newspaper reporter Kathleen (Godwin) Cole, who divorced when Gail was a child and moved to Gail's grandmother's home in Asheville, North Carolina.

Godwin attended Peace College in Raleigh, North Carolina (a women's college founded by Presbyterians) from 1955 to 1957, but graduated with a B.A. in journalism from the University of North Carolina, Chapel Hill in 1959. She worked briefly as a reporter for the Miami Herald and married Herald photographer Douglas Kennedy.

Unsatisfied by her reporting career and her husband, Godwin returned to North Carolina, working as a waitress in a tourist resort and saving money to travel to Europe. She became a travel consultant for the U.S. Embassy in London in the early 1960s.

When she returned to the United States, she worked briefly as an editorial assistant at the Saturday Evening Post before enrolling in the English program at the University of Iowa, where she studied with John Irving under Kurt Vonnegut. She earned her M.A. (1968) and PhD (1971) in there. She later taught at the Iowa Writers' Workshop, as well as at Vasser College and Columbia University.

She was awarded the 1981 National Academy and Institute of Arts and Letters Award in Literature and three of her novels (The Odd Woman, Violet Clay, and A Mother and Two Daughters) have been nominated for the National Book Award. She chaired the National Book Foundation's award judges in 1986, recieved a Distinguished Alumna award from the University of North Carolina in 1988, and was inducted into the Fellowship of Southern Writers in 1997. Godwin also penned the librettos for numerous musical works composed by her companion, Robert Starer.

Godwin currently resides in Woodstock, New York, where she lived with Starer from 1976 until his death in 2001.