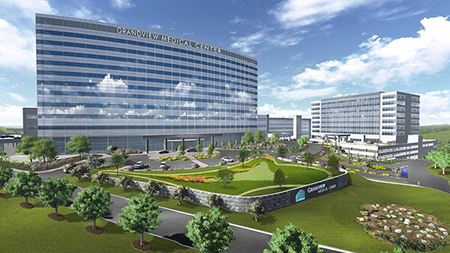 After considering construction of a new hospital campus in Irondale, Leeds or Liberty Park, Community Health Systems announced in September 2008 that they had reached a deal with the Daniel Corporation and the City of Birmingham to take over HealthSouth's unfinished hospital building. The agreement was the subject of a prolonged legal challenge from Brookwood Medical Center and St Vincent's Health System, but Trinity prevailed in 2013 and began work to complete the unfinished building and renovate it for their needs.

CHS planned to invest $205 million to buy and finish the hospital, and another $70 million for equipment. They also announced plans to build a $90 million medical office building within the Cahaba Center at Grandview campus. In January 2015 CHS purchased the Riverpoint building and demolished it to make way for future buildings on the hospital campus.