This article is about the shopkeeper, for the Barons' owner, see Gus Jebeles (Barons owner). 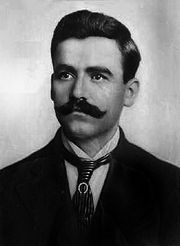 Jebeles was the son of Dimitrios and Nikoleta (Niarchos) Tsempelis of the village of Karitsa in Lakonia, Greece. He, his brother Panagiotis, and a cousin emigrated together to the United States aboard La Lorraine from Havre, France in 1900. They arrived at New York on November 26 and made their way to Anniston, where Gus' older brother John had settled.

By 1904, Jebeles had become a naturalized citizen and operated his own store on Noble Street in Anniston. Before 1912 he opened a second shop at 26th Street and 5th Avenue North in downtown Birmingham. He married the former Matina Kokkinos in Birmingham on October 10, 1915.

Jebeles registered for the draft on September 12, 1918. By 1930 he owned a home in Birmingham and added a pool room to his business portfolio. In the 1950s he donated land in Karitsa and joined two other expatriates to raise funds for the building of the village schoolhouse. He and Matina had five children.