From Bhamwiki
(Redirected from Hassinger residence)
Jump to: navigation, search

This article is about the Highland Avenue residence, for the home on Carlisle Road, see Hassinger Castle. 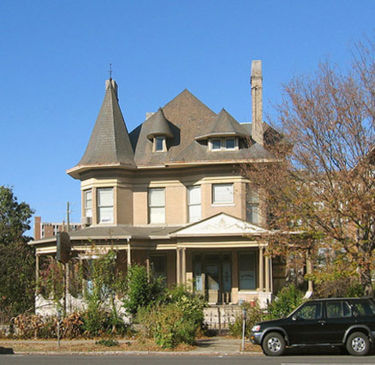 The Hassinger residence in December 2005

The house was constructed in 1898 for William H. Hassinger. It was designed by Thomas Walter III, grandson of the architect of the U. S. Capitol dome. It is faced with light-colored brick and features prominent turrets and dormers punctuating its slate roof. A wrap-around verandah terminates at a molded gable over the front steps, which lead to an iron gate facing Highland Avenue.

For a long time, the house was used as an office for Daniel's Optician, and it remained the residence of Venoa Daniels until her death in 2010.

The Alabama Historical Commission and Alabama Preservation Alliance named the Hassinger residence to its 2003 "Places in Peril" list, due to the ever-increasing threat of commercial redevelopment. In July 2007 the residence was appraised by the Jefferson County Board of Equalization and Adjustments at $459,300.

In 2010 the house was acquired by Sheila and Ira Chaffin, owners of the Cobb Lane Bed & Breakfast. They renovated the property as a 10-room bed and breakfast. The Chaffin Carousel Carving School moved to the home's basement from space in the Terrace Court apartment building.