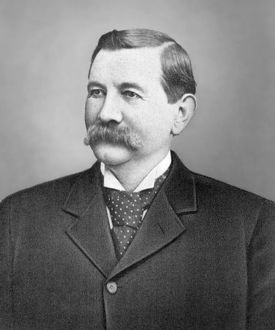 Henry F. Debardeleben in a 1920 engraving

Henry Fairchild DeBardeleben (born July 22, 1840 at Dutch Bend, Autauga County; died December 6, 1910) was an industrialist and developer. He has been called the "King of the Southern Iron World", and was the founder of the city of Bessemer.

DeBardeleben was the son of Henry DeBardeleben and his second wife, the former Mary Anne Fairchild, who owned a farm near Prattville in Montgomery County. His father died when Henry was 10 and he and his mother moved to the city of Montgomery, where he took a job working as an apprentice baker in a grocery store. At the age of 16 he moved to Prattville to became a ward of industrialist Daniel Pratt, a family friend. He lived in Pratt's mansion and worked as a foreman in his lumber yards and cotton gin factory.

Like Pratt, Debardeleben was opposed to secession. However, once Alabama withdrew from the Union in April 1861, DeBardeleben joined the Prattville Dragoons as an ensign and commissary officer and went to Pensacola, Florida for training. The following February the unit was deployed in Chattanooga, Tennessee and was engaged in the Battle of Shiloh, and later at Corinth, Mississippi. By the beginning of 1863, DeBardeleben had resigned from the army, eloped with Pratt's daughter Ellen, and returned to his father-in-law's machine shops.

After the end of the Civil War Pratt partnered with DeBardeleben to purchase controlling interest in the Red Mountain Iron & Coal Company. DeBardeleben moved to the Birmingham District to serve general manager of what they renamed the "Eureka Mining & Transportation Company". Together they rebuilt the Oxmoor Furnace near Birmingham. Pratt died in 1873 and DeBardeleben inherited the company, but the Panic of 1873 forced him to shut down the furnace.

In 1877 DeBardeleben joined with Truman Aldrich and James Sloss to found the Pratt Coal & Coke Company, incorporated in January 1878, which developed the Pratt seam of coking coal west of Birmingham. A year later DeBardeleben began construction, with T. T. Hillman, of the Alice furnaces, named after his oldest daughter. DeBardeleben and his partners sold the Pratt company to Enoch Ensley in 1881. Fearing the onset of tuberculosis, DeBardeleben moved to dryer country in Laredo, Texas and then across the border to Mexico, where he raised sheep. His symptoms subsided and he returned to Alabama the following year.

DeBardeleben partnered with Kentucky attorney William Underwood to construct a new Mary Pratt Furnace in 1883. After another brief move to Texas during a relapse of his symptoms, he and South Carolina banker David Roberts raised $2 million in capital in 1886 for the DeBardeleben Coal & Iron Company. The new company purchased over 150,000 acres of mineral lands in the Birmingham District, making it the largest industrial concern in the South. Among the companies acquired by DeBardeleben Coal & Iron were the old Eureka Mining & Transportation Company, and the Henry Ellen Coal Company.

On a 4,040-acre parcel southwest of Birmingham, around the community of Brooklyn, DeBardeleben platted out and developed the city of Bessemer, which he named for Henry Bessemer, the British inventor of an improved process for making steel. He intended for the new venture to surpass Birmingham as the center for steel-making in the District.

DeBardeleben's Bessemer Land & Improvement Company occupied an ornate two-story brick building at the center of the new city and the first lots were sold on April 12, 1887. Rapid investment and growth in the area earned Bessemer the nickname of "Marvel City".

In 1892 DeBardeleben sold his industrial concerns, then valued at over $13 million, to the Tennessee Coal, Iron & Railroad Company and was made a vice-president. He made a failed attempt to assume control of the company through a stock manipulation scheme, losing most of his assets in the process. He was forced out of the company during the Panic of 1893. Ellen died in 1894 while her husband was engaged in efforts to break the Great Strike of 1894.

The aging DeBardeleben was not finished with industrial development, nor with marriage. He wedded Katherine McCrossin in 1898. His Alabama Fuel & Iron Company, founded with his sons Henry and Charles, began coal mining at Margaret in St Clair County and the Acton Basin in present-day Hoover beginning in 1906. He also held an interest in the Birmingham Rolling Mills and Birmingham National Bank.

DeBardeleben died in 1910 and is buried at Oak Hill Cemetery. He and his first wife, Ellen, had seven children: Alice, Mary, Jenny, Henry Ticknor, Charles, Arthur, Julia and Samuel.