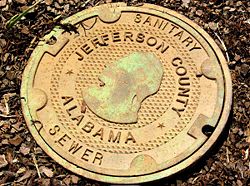 The Jefferson County sewer construction scandal encompasses $3.3 billion spent on repairs, upgrades and expansions of the Jefferson County sewer system, made in part to comply with a 1996 consent decree drafted to ensure future compliance with the federal Clean Water Act. A 2003 study found that much of the money was misspent, costing rate payers hundreds of millions of dollars in unnecessary expenditures. Due to the project's enormous costs, county-wide sewer rates have increased markedly, from among the lowest in the country to the highest, and are projected to continue indefinitely in order to service outstanding debts.

Furthermore, several county officials have been prosecuted for corruption in contracts related to sewer projects, and a series of increasingly-complicated interest rate swaps carried out in effort to reduce overall debt service backfired, causing Jefferson County to file of the largest municipal bankruptcy in U. S. history in November 2011.

In 1993 attorney Bart Slawson filed a lawsuit (Kipp, et.al. v. Jefferson County) against the county on behalf of residents near the Cahaba River alleging that the county's sewer system was spilling and overflowing during heavy rains, allowing large amounts of untreated wastewater to enter the Cahaba River, a source of drinking water for much of the region (the Cahaba River Society joined the suit after it was filed). The plaintiffs documented over 4,000 specific violations, which prompted the U.S. Justice Department to investigate and follow suit with United States v. Jefferson County, Alabama, Jefferson County Commission, and the State of Alabama.

The county, represented by county attorney Andy Strickland, settled both lawsuits in the United States District Court for the Northern District of Alabama by signing a consent decree in December 1996. The county agreed to make the improvements necessary to satisfy the United States Environmental Protection Agency (EPA) that the system complied with the federal Clean Water Act. Other terms of the agreement required the county to spend $30 million for the establishment of protective greenways to improve water quality in the Cahaba and Black Warrior River systems and to pay a civil penalty of $750,000. Altogether, the cost of complying with the decree was estimated to be $1.2 billion

Though major construction was complete by 2008, the EPA still had scores of documented infractions which needed to be addressed before they could certify full compliance with the consent decree. On April 18, 2008 District Court Judge J. Foy Guin Jr certified that the county had met the requirements for the smallest of nine affected systems, affecting the Warrior River. By April 2012 five of the nine waste treatment systems operated by the county had been certified as compliant, including those at Turkey Creek, Warrior, Trussville, Prudes Creek and Leeds.

The systems remaining under the courts' oversight include Five Mile Creek, Valley Creek, Village Creek and the Cahaba River basin.

While the lawsuit against the system was progressing, planners from the Jefferson County Department of Environmental Services, headed by Jack Swann, were studying the merits of various expansion projects not specifically required by the consent decree. They defended the expansions as needed for economic development and to increase the number of ratepayers who would share the costs. This expansion of the utility was supported by USX Realty, the largest private land-owner in the county and developer of several proposed subdivisions, including Liberty Park.

Swann said the county would count all projects to improve the performance of the system as "court-ordered". Activists from the Cahaba River Society argued that less than half of the County's expenditures were going toward correction of the faults identified in the lawsuit.

The largest single project was an $84 million plan to provide new sewer service to the Upper Cahaba Watershed around Cahaba Heights and parts of Mountain Brook. The "Cahaba Trunk Sewer", popularly dubbed the "super sewer" when it was first discussed in 1992, would entail construction of a major trunk line from Grants Mill Road to the Cahaba River Wastewater Treatment Plant in Hoover. As planned, the new trunk sewer line would cross underneath the river a dozen or more times along its route. Critics of the plan immediately challenged not only the risky proposition of tunneling under the Cahaba River, but also the need for such an enormous project which could only encourage overdevelopment of the environmentally-sensitive watershed area. Following the consent decree the project was shelved until it was quietly resumed in 1999 with work in the Altadena Valley.

Swann and the Jefferson County Commission proceeded with construction, however, and saw projected costs swell to over $140 million. In late 2000 the revived project came to public attention when the County began buying rights of way needed near U. S. Highway 280. Construction was halted in July 2002 when the Birmingham Water Works Board, which owns easements along the river, asked for new risk-assessments. Engineers found less solid rock under the riverbed than they had expected. Meanwhile public outcry led the Jefferson County Commission to initiate more public hearings on the plan. Swann protested that the delays were costing ratepayers $15,000 per day and that halting the project would cost another $6.5 million. The Health Department challenged the planners' interpretation of their report on septic failures and called for a comprehensive land-use plan to determine actual needs and an independent risk assessment for the tunnel scheme.

Ultimately the $3 million tunneling machine being used to dig the "super sewer" was abandoned in place because it could not be backed out of its tunnel.

After a series of reports in the Birmingham News brought public outcry, the Jefferson County Commission hired BE&K engineering to review the sewer construction program and report its findings. The result, presented in October 2003, showed numerous serious shortcomings in management of the program as well as questionable decisions made by county officials.

The report recommended that the county hire a project manager to oversee the completion of the sewer upgrades and to offset fast-climbing sewer rates by increasing property taxes and development fees.

In the Summer of 2005 a multi-count indictment naming 21 defendants was filed by the Federal Bureau of Investigation (FBI) in connection with alleged bribery, conspiracy and obstruction of justice. As of April 2008 fifteen individuals have been convicted of bribery.

The financial burden of the sewer improvements, compounded by extra spending on expansion and overcharging for services, was again compounded when later Jefferson County Commissions engaged in further schemes intended to save ratepayers money. Those complicated bond refinancing swaps, negotiated primarily by Larry Langford in concert with Bill Blount and Al LaPierre, backfired during a national financial crisis in 2007 when the firms insuring the bonds' interest rates failed. Facing a sudden inability to make payments, the county began negotiating with bondholders under threat of bankruptcy.

Most of the sewer work was contracted with bond money to be repaid by increased sewer rates. As expenses mounted, the county's schedule for increasing rates has had to follow suit. The county's authority to set rates is established by the Alabama Constitution. In case of delinquency, the County can attach a lien to the properties served.

In 1997 the Commission adopted an ordinance which would automatically increase rates each January. The amount of the yearly increase would be set by the County finance director in order to meet rate covenants which were made with bond issuers to hold down interest rates. In addition to the yearly increase, the Commission adopted two mid-year increases (March 1, 1999 and April 1, 2001). Twice the commission reduced the finance director's proposed January increase (2004 and 2005).

Average monthly residential sewer bills in Jefferson County are based on typical usage of 10000 cubic feet of water per household minus a 15% credit for water not returned to the sewer :

A pair of "special masters" appointed by District Court Judge David Proctor concluded that sewer rates would have to be increased by 400% to meet 2009 debt obligations. Among their recommendations to the county was raising rates by as much as 25% per year and eliminating the 15% credit for water not returned to the sewer. If imposed, Jefferson County's sewer rates would quickly become the highest in the nation.

Rather than raise rates as recommended, the county defaulted on payments while seeking other means of reducing its indebtedness. In a suit filed by the Bank of New York Mellon, trustee over much of the system's obligations, Circuit Court Judge Albert Johnson appointed New Jersey Water Works executive John S. Young as receiver, granting him power to administer, operate and protect the system -- including the power to raise rates. Young's recommendations, made in Spring 2011, included raising sewer rates by as much as 25% in the first year, with additional increases dependent upon other measures taken to reduce the county's indebtedness.

In September 2011 the county agreed on a tentative plan which would cap future rate increases at 8.2% per year for three years, and 3.25% per year after that. When negotiations with creditors faltered in November, the county declared bankruptcy, putting control of the sewer system into the hands of Judge Thomas Bennett.

A deal with a majority of creditors was announced in June 2013. Under that agreement, sewer rates would go up 7.41% per year for four years, and then could be raised up to 3.94% per year thereafter, not counting future bond issues for additional capital projects, regulatory compliance and/or inflation. By that reckoning, rates would have been expected to increase as indicated:

In fact, the annual rate increases were enacted under the terms of the Jefferson County Sewer Use Charge Ordinance adopted in November 2012 and amended several times since. Beginning in March 2013 the residential rate schedule was restructured with "tiered usage blocks". Residential customers were charged a fixed monthly base rate beginning at $10, or more depending on the size of their meter. The usage rate for the first 300 cubic feet of water (3 ccf) was set at $4.50/ccf, then $7.00/ccf for the next 300 cubic feet, and $8.00/cff beyond that, minus an overall 15% credit for water not returned into the system. Non-residential rates were set at $7.60/ccf for all metered water plus additional fees for industrial wastes. The base charge was increased to $15 later that year.