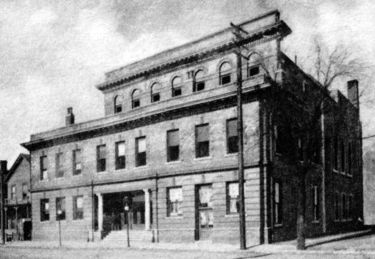 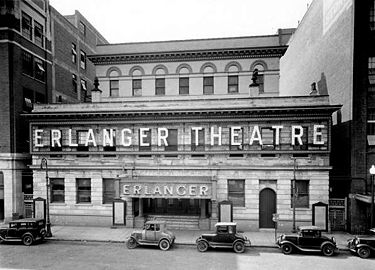 The Jefferson Theatre was a marquee playhouse which operated from 1900 to the 1930s on a 100-foot-wide parcel in the 1700 block of 2nd Avenue North (Block 88). The theater was developed under contract by Thomas Molton and dedicated in March 1900 with Rufus Rhodes, publisher of The Birmingham News, officiating. It was named for actor Joe Jefferson, who had become a legend for portraying Rip Van Winkle on stage around the country. His portrait hung over the theater's proscenium and he brought his touring company to Birmingham several times.

The two-story Neoclassical limestone facade was pierced with regular window openings. The recessed entry was flanked with single columns and shaded by a shallow canopy. A separate entrance for the gallery was in the alleyway to the left of the building, and the stage door was on the right. A deep cornice wrapped the top of the facade, punctuated by a pair of urns on piers. The fly house occupied a taller section at the rear of the building, with its own line of windows topped by arched moldings and a second cornice.

Upon its opening, the Jefferson claimed the mantle of Birmingham's premiere playhouse from O'Brien's Opera House. After the Lyric Theatre opened in 1912, the two houses vied for the top vaudeville acts.

On June 1, 1903 the Jefferson hosted a mass meeting in protest of the massacre of Jewish residents of Kishineff, Russia. On December 7 of the same year a meeting was held to discuss the progress of the project to send a colossal statue of Vulcan to St Louis for the next summer's world's fair. Robert Jemison Jr took the opportunity to demonstrate electric lighting which was added to the theater for the meeting.

On July 23, 1904 the Jefferson hosted a landmark performance of the Whitman Sisters' New Orleans Troubadours, notable because it was the first time African-American theatre goers were allowed seats "in the dress circle and parquet". Contralto Ernestine Schumann-Heink headlined a recital at the Jefferson Theatre on November 15, 1907.

On March 9, 1914, it served as the hall for the launch of the Alabama Equal Suffrage Association's campaign to lobby the Alabama State Legislature for women's voting rights, with Jane Addams and Bossie O'Brien Hundley as featured speakers. Later it hosted the 1915 Birmingham premiere of D. W. Griffith's The Birth of a Nation, a spectacle that coincided with the renewed activities of the Ku Klux Klan.

Among the massive productions that were mounted in the Jefferson was a grand staging of Ben-Hur with four horses running abreast on treadmills during the chariot race. Maude Adams starred in a touring production of Peter Pan at the Jefferson. The theater was also serving as the venue for the Birmingham Music Festival when the city's first symphony orchestra was assembled for a performance on April 29, 1921. On January 22, 1923 pianist Sergei Rachmaninoff made his Birmingham debut on the Jefferson's stage.

By 1912 the Jefferson was associated with the Klaw-Erlanger Vaudeville circuit, based in New York City. At the time, the theater, managed by R. S. Douglas, reported a seating capacity of 600 on the lower floor, 400 in the balcony, 400 in the gallery and 32 in boxes. The proscenium opening was 36 feet by 36 feet and the stage was 70 feet wide and 39 feet deep with 4 feet between the curtain and footlights. The rigging loft was 60 feet tall with a fly gallery at 25 feet and 8 feet beneath the stage floor. The theater offered 14 dressing rooms and both gas and electric lighting. At one point, the name of the venue was briefly changed to the Erlanger Theatre. The building went dark during the Great Depression.

In 1940 the dormant theater was leased by Ted Barker for a season of stock performances with visiting star players, but the enterprise didn't last. The vacant building was demolished in 1946 for a parking lot. The site soon was used for an expansion of the adjacent Phoenix Building.