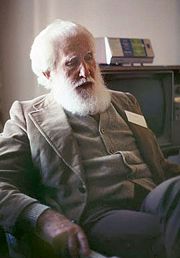 John Henry Newman Beecher (born January 22, 1904 in New York City; died 1980) was an activist poet who wrote about the Southern United States during the Great Depression and the Civil Rights movement. Beecher was extremely active in the American labor and Civil Rights movements.

Beecher was the great-great-nephew of Henry Ward Beecher and Harriet Beecher Stowe. His father, Leonard T. Beecher was a steel industry executive who, in 1907, was transferred to Birmingham to work for U. S. Steel. His mother, Isabel Garghill Beecher was a dramatic reader, actress and teacher of oratory. From the age of 3, Beecher grew up in the Birmingham District and attended Birmingham's public schools, graduating high school at 14, and spending the summers at military academies in Indiana and Pennsylvania.

Beecher's family had intended their son to become an executive like his father. However, as a young man Beecher went to work 16 hour days in the steel mills at the outset of the Great Depression. The labor abuses he saw there caused him to become active in labor movement issues. He also began to write the radical activist poetry for which he eventually became known.

Beecher alternated college with working in the steel mills until 1925, when he was severely injured while helping to build the Fairfield Works Sheet Mill. He has already spent time studying at the Virginia Military Institute, the University of Alabama, the University of North Carolina, the University of Wisconsin, Cornell University and the Paris Sorbonne. After recuperating, he entered Harvard Graduate School, then began working at a variety of jobs, including positions with the United State government's Emergency Relief Administration in various states across the South.

He was a district relief administrator in North Carolina, a social research supervisor in Mississippi, a manager of resettlement community in Alabama, a director of migratory labor camps in Florida, and rose through the ranks of the Fair Employment Practice Committee. 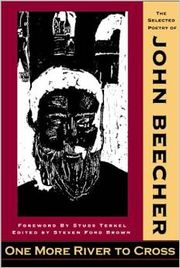 One More River to Cross: The Seleted Poems of John Beecher

During World War II, Beecher served as a commissioned officer of the racially integrated crew of the troop transport Booker T. Washington and wrote a book about these experiences. After the war he directed refugee camps in the Stuttgart area. He continued to study labor politics and did extensive research on farm labor policies in Minnesota. During the McCarthy era, he was blacklisted and fired from his teaching job at San Francisco State University. Three decades later the California Supreme Court overturned his firing and he was reappointed to his teaching position.

In 1963 he began a two year stint as poet in residence at the University of Santa Clara. In 1966-67 Beecher returned to Birmingham as a visiting professor at Miles College, during which time he published his celebrated collection of poems, To Live and Die in Dixie. After that year he toured the United States giving readings. In 1969 he accepted a position at the North Shore Community College in Beverly, Massachusetts. In 1971 Beecher moved to Florida for health, but stayed only a short while before accepting another residency in Worcester, Massachusetts, and later at Duke University in Durham, North Carolina.

Like Woody Guthrie and John Steinbeck, who also chronicled the massive displacements of the Great Depression and the growth of the American labor movement, Beecher used his books and poetry to address basic human issues such as justice and equality. Unlike these other writers, though, Beecher also addressed issues of racism in his writing, especially as Beecher saw this issue existing in the pre-Civil Rights Movement South.