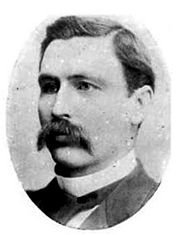 John S. Gillespy Jr (born November 17, 1859 near Jonesboro; died after 1920) was a physician and clerk of the City Court of Jefferson County.

Gillespy was the son of John and Martha McAdory Gillespy, both of whom died when he was five years old. He was raised by his grandparents, James and Nancy Sadler McAdory, on their farm. He was educated at the common schools and by his uncle, Isaac McAdory at Pleasant Hill School, after which he clerked in a general store in Jonesboro and saved money to go to medical school.

Gillespy enrolled at the Miami Medical College of Cincinnati, Ohio, graduating in 1883 and returning to Jonesboro to practice. He married Eugenia Owen on October 10 of that year and eventually had six children.

In 1884 he moved to Scottsboro, then a year later arrived in Birmingham. In 1888 he was elected Birmingham City Physician for one year. In 1892 he was elected Jefferson County Physician and served for six years, resigning to accept the position of City Clerk for the county, which he held until 1904.

Gillespy was a member of the Democratic Party and of the Jefferson County Medical Society and Alabama Surgical and Gynecological Association. He was also appointed to the staff of visiting physicians for the Hospital of United Charities of Birmingham.