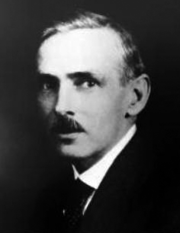 John Randolph Hornady (born May 15, 1872 in Ringgold, Georgia; died March 1, 1948 in Rome, Georgia) served as Commissioner of Health and Education on the Birmingham City Commission from 1915 to 1921.

Hornady was the son of John Randolph Hornady and the former Annie Lawton Mulkey. His father, a jeweler, moved to Birmingham in 1873, but relocated to Wilsonville in Shelby County in 1876. Hornady was educated there and returned to Birmingham in 1895 to find work. He started off in a bicycle shop, but soon began composing humorous articles to the Birmingham Age-Herald.

Before long Hornady began working as a full-time reporter for the Birmingham Ledger, and spent the next several years volleying from paper to paper, advancing from reporter to city editor to managing editor. One year he even relocated to Cincinnati to join the Enquirer's editorial staff, but returned to become an associate editor for the Birmingham News.

With the News, Hornady reported on proposals to establish a City Commission to replace the existing Mayor-Alderman form of government, investigating the workings of commissions in other cities and helping shape opinion in favor of the more progressive government through his editorials as well as in public lectures and meetings. He was elected to the body in 1915 and re-elected in 1917 and also served as the vice-president of the five-member board. Hornady's accomplishments on the board included a successful public campaign to increase Jefferson County and Birmingham city property taxes for the benefit of schools. He also lead private fundraising campaigns to benefit schools.

Hornady married the former Maude Simmons in 1898 and had three children: John Jr, Cecil and Ernestine.

In 1921 Hornady compiled The Book of Birmingham chronicling the city's achievements in its first 50 years.