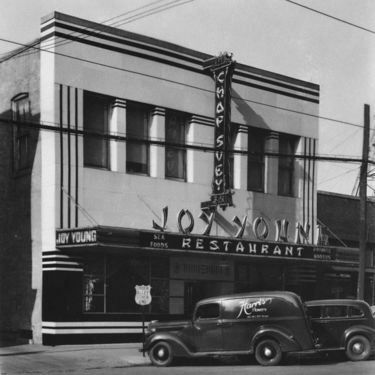 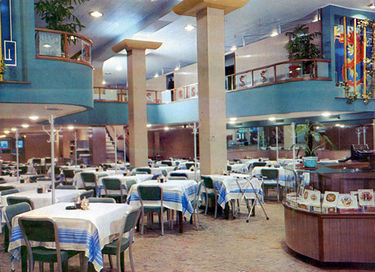 In October 1925 the restaurant moved to 412 20th Street North opposite the Tutwiler Hotel, soon expanding into the former shop next door. The owner Mansion Joe, and manager Henry Loo, had earned reputations as friendly, generous businessmen, sometimes helping provide meals to the needy. That reputation served them well as the Ku Klux Klan found no support from the public in efforts to drive the restaurant out of business.

On January 2, 1926 Joy Young and two other Chinese restaurants, Shanghai Low and King Joy, were "raided" by eight men wearing masks and hoods, purportedly serving "warrants" for the alleged sale of whiskey to diners in private booths. The raiders abducted suspected partakers and brought them to the county jail, but were turned away. Virginia Bridge & Iron Co. engineer W. W. Israel, an officer of the "Woodlawn Ku Klux Klan No. 59" affirmed that he was an instigator of the raids, which were subsequently panned as illegal, and at least two of the hooded participants were said to have been sworn "special deputies" of the Jefferson County Sheriff's Office. The owners of the businesses made plans to file lawsuits against the raiders. Mansion consulted with attorney Hugo Black. The restaurant owners set aside those plans as two grand juries began investigations. Sheriff T. J. Shirley was out of town on the night of the raids, but later complained that the publicity of the incident, "was only a plot on the part of newspapers to run down the Ku Klux Klan, and that the fact that persons were found in the cafes drinking was as big a crime as hooded raiders." 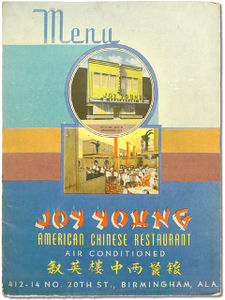 Second-generation restaurateurs Wing Soon Joe were Loo Choy were involved in the restaurant's heyday. In the 1964 city directory, the proprietor is listed as George W. Sai. In the 1960s a new location on Highland Avenue opened as New Joy Young Restaurant. Another "Joy Young" restaurant operated in Memphis.