Difference between revisions of "Kalyn Chapman" 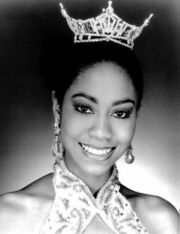 Chapman grew up in Mobile and graduated from Murphy High School in 1988. That summer she was employed by the Universal Dance Association as a dance instructor at camps around the country. In the fall she enrolled at Loyola University in New Orleans, Louisiana. While there she auditioned with Walt Disney-MGM Studios and was cast as a performer in their Dick Tracy stage show. She injured a knee during that year-long engagement and resumed her studies at the University of South Alabama.

In 1993 Chapman was crowned Miss Leeds Area, granting her a third invitation to the Miss Alabama pageant. She performed a modern dance routine to Duke Ellington's "The River" and spoke on improving education in Alabama as her pageant platform. She was crowned Miss Alabama on June 19, 1993 and became the first African American to wear the crown. She spent the next year making public appearances and speaking to student and civic groups. In September she competed in the Miss America pageant in Atlantic City, New Jersey and finished in the top ten.

After turning over her crown to Heather Whitestone, Chapman married Terry Roller and returned to college, completing a bachelor of science in psychology at UAB in 1997. While in school she also worked as a model, dance instructor, choreographer, fitness instructor, emcee, television host and voiceover artist. She divorced Roller in 1998. That same year she was hired as a spokeswoman for the newly-opened Visionland amusement park. In February 1999 Chapman was selected as one of Birmingham's "Most Beautiful People by Birmingham magazine.

In 2003 she married Rico James and moved to Miami, Florida. She and James have two daughters, Phoenix and Zen. She has worked as a teaching artist and as an on-air reporter for the Fox Sports Network and has appeared in numerous television commercials and as a performer on Univision and MTV Latin America programs. She currently works as host of the television series "Art Loft" for WPBT-TV and as a Corporate Sponsorship Coordinator for the Adrienne Arsht Center for the Performing Arts in Miami.

On July 10, 2016 Kalyn Chapman James posted a personal video to her Facebook page in which she expressed conflicting emotions about the murder of three police officers in Dallas, Texas, a crime that came on the heels of two highly-publicized police-involved shootings of black men in Louisiana and Minnesota. In the video, which she made in her car after attending church, she said that, "I'm dealing with a bit of guilt because I don't feel sad for the officers that lost their lives, and I know that that's not really my heart. I value human life. And I want to feel sad for them but I can't help but feeling like the shooter was a martyr. And I know it's not the right way to feel because nobody deserves to lose their lives." She later explained that the video captured only part of how she was processing her strong feelings over many issues that surrounded the shootings and reactions to them, that she did not consider the shooter any kind of hero, and that she did grieve for all who lost their lives.

Amid public backlash against her expression, WPBT placed her on administrative leave.