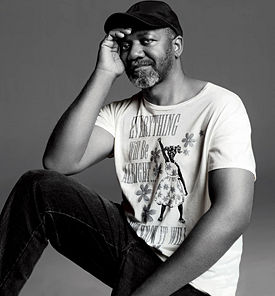 Kerry James Marshall (born October 17, 1955 in Birmingham) is a Chicago-based contemporary artist known for his large-scale paintings on African-American themes.

Born in Birmingham, Marshall's family moved to South Central Los Angeles in 1963, going from a hotbed of the Civil Rights Movement to an area at the center of the black power movement of the 1960s and 70s. Interested in painting from an early age, Marshall drew inspiration from his everyday life, as well as from comic books and museum catalogs. Throughout his career his work has been distinguished by the presence of nearly-silhouetted black human figures.

In junior high school Marshall learned about the work of Charles White and had the opportunity to visit his studio as part of a summer drawing program. He later became one of White's students at the Otis Institute of Art and Design in Los Angeles, completing a Bachelor of Fine Arts in 1978. As a formal art student, Marshall expanded his realistic style to mural-sized works, including collages and sculptures. Later works have shown the influence of African aesthetic traditions. His "Mementos", and "Souvenir: Composition in Three Parts" make reference to the 1963 bombing of 16th Street Baptist Church.

Marshall was awarded a resident fellowship to the Studio Museum in Harlem in 1985. He received fellowship grants from the National Endowment for the Arts in 1991 and from the Illinois Arts Council in 1992. In 1997 he was awarded a MacArthur Foundation "Genius Grant" and another grant from the Herb Alpert Foundation. His work was featured in traveling solo exhibitions in 1994 and 1998. The Birmingham Museum of Art featured work by Marhsall in 2003, and has some of his work in its permanent collection. His work has also been exhibited at the Venice Biennale (2003) and Germany's Documenta (1997 and 2007), and is in the permanent collections of the Whitney Museum of American Art, the Musuem of Modern Art, the Chicago Museum of Contemporary Art, the San Francisco Museum of Modern Art, the Los Angeles County Museum of Art, and the Corcoran Museum of Art.

Marshall's 1997 painting "Past Times" set an auction record for a work by a living African-American artist when it sold for $21.1 million in May 2018 at Sotheby's.

Marshall worked as an associate professor of art at the University of Illinois in Chicago. His studio is in the Bronzville neighborhood in that city's South Side. He has also worked as a production designer in independent films and is married to actress Cheryl Lynn Bruce.