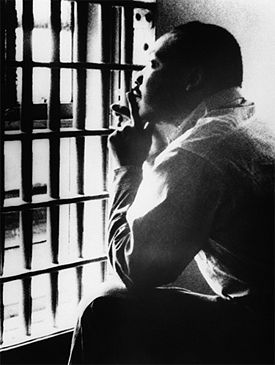 The Letter from Birmingham Jail, composed by Martin Luther King Jr from his cell in the Birmingham City Jail and dated April 16, 1963, was a seminal document that established the moral foundations for the non-violent civil rights demonstrations of the Birmingham Campaign.

King was arrested along with Ralph Abernathy during the Good Friday march on April 12, 1963. He was charged with parading without a permit, and spent eleven days in solitary confinement at the jail.

The idea of composing a "jailhouse epistle", along the lines of the letters sent by the apostle Paul from his own imprisonment, had been discussed before by King and Abernathy, specifically during the 1962 Albany campaign. The idea had also been suggested to King by New York Times Magazine editor Harvey Shapiro.

King's letter was directly inspired by, and composed as a response to "A Call For Unity", an open letter signed by eight white clergymen of Birmingham published in the Birmingham News on the day of his arrest. The "Call For Unity" was critical of the protests and incendiary actions organized in Birmingham by "outsiders" and called for forbearance and respect for the law as the courts gradually eroded the worst injustices of segregation.

King began composing his letter as notes in the margin of the News article. Later he continued on scraps of paper given to him by a prison trusty, and on pads smuggled to him by his attorneys. His references to scripture and to theological and philosophical sources were lifted from memory, and he relied heavily on fragments of his own familiar sermons and speeches.

In responding point-by-point to "A Call for Unity" King crafted what he called the longest letter he had written: "But what else can one do when he is alone in a narrow jail cell, other than write long letters, think long thoughts and pray long prayers?"

He begins by justifying his presence as an "outsider" in Birmingham. He touches on the organizational ties between his Southern Christian Leadership Conference and the Alabama Christian Movement for Human Rights and the invitation extended to him to plan, if needed, a program of nonviolent direct action in protest against what he deemed "probably the most thoroughly segregated city in the United States." He connected the situation in Birmingham with wider crisis of equal rights, saying that "injustice anywhere is a threat to justice everywhere."

To answer the criticism that negotiation should not be abandoned in favor of protest, King asserts that entreaties by leaders of the Black community were rejected by the leadership of the city and that agreements made with merchants to voluntarily integrate their businesses were broken. He identifies the purpose of nonviolent protest as a means "to create a situation so crisis packed that it will inevitably open the door to negotiation." He explains that there was no alternative except to "present our very bodies as a means of laying our case before the conscience of the local and the national community."

He answers criticism of the timing of the campaign, following on the heels of Bull Connor's defeat by Albert Boutwell in a runoff for Mayor of Birmingham. White leaders wanted Boutwell to be given time to enact changes without conflict, but King asserted that Boutwell's administration was equally dedicated to maintaining inequality, and would hopefully respond productively to the pressure put on him by mass demonstrations. The Easter season was chosen because it was an important time of the year for merchants, who had already shown some willingness to make concessions to the protesters.

Furthermore, he detailed the reason that the "impatience" of the African American was fully justified. "For years now I have heard the word 'Wait!' It rings in the ear of every Negro with piercing familiarity. This 'Wait' has almost always meant 'Never'. He concludes with the words of William Gladstone, "Justice too long delayed is justice denied."

Regarding the apparent hypocrisy of insisting on compliance with the interpretation of Brown v. Board of Education while openly breaking anti-protest ordinances, King distinguishes between just and unjust laws. The difference, he argues, is that just laws serve to unite people under the universal rule of law while unjust laws are used to enforce separation between groups, one enforcing the obedience of another. At other times a law can be just on its face, but unjust in its application. He goes on to say that "an individual who breaks a law that conscience tells him is unjust, and who willingly accepts the penalty of imprisonment in order to arouse the conscience of the community over its injustice, is in reality expressing the highest respect for law."

After answering the criticisms leveled against him, he turns the tables on the established church, and the "white moderate [...] who paternalistically believes he can set the timetable for another man's freedom," and whose "lukewarm acceptance is much more bewildering [even], than outright rejection."

He bristles at first at the idea that he is advocating extremism. He perceives that the repressed African American spirit will only grow more earnest in pursuit of justice and that without the disciplined, loving and peaceful outlet of non-violent protest, that more and more will reject American and Christianity outright and join the growing Black militant movement. On the other hand, he is proud to be allied with the extreme teachings of Christ, "Love your enemies, bless them that curse you, do good to them that hate you, and pray for them which despitefully use you, and persecute you." He deplores the eagerness of church leaders to trivialize, ignore, or outright defame the struggle for justice in which he is engaged. He diagnoses the organized church as having shed itself of the "inner spiritual church, the church within the church, as the true ekklesia and the hope of the world.", condemning itself to irrelevance and the disdain of seekers of a true path.

He closes by admonishing the authors of "A Call For Unity" for their praise of the police for "keeping order" and hopes that they will open their eyes to the true heroes of the time. He expresses a hope to soon meet each of his correspondents as fellow clergymen and Christian brothers after the "dark clouds of racial prejudice...pass away and the deep fog of misunderstanding [is] lifted from our fear drenched communities."

Though Shapiro had suggested the letter, it was not published in the Times. The American Friends Service Committee (AFSC), a Philadelphia, Pennsylvania-based organization of Quakers, received a manuscript version of the letter from James Lawson and published 50,000 pamphlet copies of "Letter from the Birmingham City Jail" in May 1963.

King edited some of the text next for later publications. The letter appeared again in print on May 27, 1963 in Christianity and Crisis No. 23 and June 12, 1963 in Christian Century No. 80. Later that month it was the the cover article for the June 24, 1963 issue of The New Leader. The letter was read into the Congressional Record on July 11 of that year. It was reprinted shortly thereafter in The Atlantic Monthly (entitled "The Negro is Your Brother") and Ebony (August 1963).

King included the full text in an authoritative version in his 1964 book Why We Can't Wait.

King's letter was quickly recognized as the definitive statement on the rationale and goals of the organized Civil Rights Movement, which until then had often been misinterpreted and misunderstood by the public. It was publicized on the heels of the successful Birmingham Campaign and was employed by the Southern Christian Leadership Conference in their efforts to raise funds in advance of the 1965 "March on Washington for Jobs and Freedom".

Since then, King's letter has been anthologized and reproduced as the single most important primary document of the Movement. It has been translated into 40 languages and is assigned as required reading for history classes around the world.

Meeting in Birmingham in January 2011, clergy attending the 2011 Annual Meeting of Christian Churches Together issued "A Letter from Birmingham" in response to King's letter, expressing "profound gratitude" for the moral leadership and sacrifices of the Civil Rights Movement.