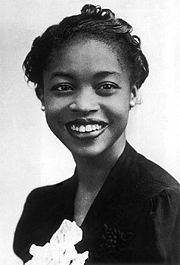 Margaret Abigail Walker Alexander, known as Margaret Walker (born July 7, 1915 in Birmingham; died November 30, 1998 in Chicago) was a writer and poet. She has been called the "senior-ranking writer of the African American South and probably its greatest poet" by critics. (Miller - 1999)

Walker was born to Methodist minister Sigismund C. Walker and his wife Marion Dozier Walker, a music teacher, in 1915. They raised her, mostly in Mississippi and New Orleans and taught her poetry and philosophy at home. She graduated from the Gilbert Academy in New Orleans and enrolled at New Orleans University (now Dillard University). At the urging of Langston Hughes, she transferred to Northwestern University in Chicago, earning a bachelor of arts in 1935.

From 1936 to 1939, Walker worked for the Work's Progress Administration's Federal Writers' Project. She later returned to school, earning a master of arts in creative writing from the University of Iowa in 1940. She then began teaching, first at Livingstone College in Salisbury, North Carolina in 1941, then at West Virginia State College in 1942.

In 1943 Walker married interior designer Firnist James Alexander and moved with him to High Point, North Carolina. In 1949 she moved with her growing family to Jackson, Mississippi to accept a faculty position at Jackson State College, where she remained, with the exception of her doctoral studies at Iowa (Ph.D, 1965), a Ford Foundation Grant to study history at Yale, and a Fulbright Fellowship to Norway (1971) until her retirement in 1979.

In 1968 Walker founded the Institute for the Study of History, Life, and Culture of Black People (now the Margaret Walker Alexander National Research Center), which she directed until retirement. She also organized the Phillis Wheatley Poetry Festival in Jackson. After retirement she continued writing and served as professor emeritus at Jackson State.

Her most famous poem, "For My People", was published in 1937 in Poetry magazine. It formed the centerpiece of her first volume of poetry, completed for her Master's thesis, which earned her the Yale Younger Poets Award. She continued to publish poetry over the next several decades, with anthologized collections appearing regularly. Her historical novel, Jubilee, inspired by stories about her great-grandmother, Margaret Duggans Ware Brown, tells the story of a slave woman who struggles through Reconstruction in Greenville, Alabama. It was her life's work, which she completed for her doctoral dissertation at Iowa and saw publshed to great acclaim a year later, winning the Houghton Mifflin Literary Fellowship Award. Her biography of fellow South Side Writer's Project poet Richard Wright was published in 1988.

She died of breast cancer at her daughter's home in Chicago 1998. She left several writing projects incomplete, including a biography of Sister Thea Bowman, an account of the infamous 1970 Jackson State double murder, an autobiography, and an analysis of Jesse Jackson's political career.