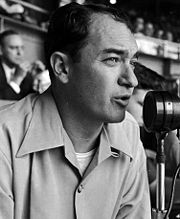 Mel Allen (born Melvin Avrom Israel on February 14, 1913 in Johns; died June 16, 1996) was a noted sportscaster and announcer for the New York Yankees. During the peak of his career in the 1940s and '50s, Allen was arguably the most prominent member of his profession, his voice familiar to millions. In his later years, he gained a second professional life as the first host of This Week in Baseball.

Melvin was born in the Johns community to Russian immigrants Julius and Anna Isreal. Julius Israel was a cloth and dry-goods salesman who travelled all over the state before settling in Tuscaloosa. He saw his first baseball game while visiting his aunt in Detroit, witnessing one of Babe Ruth's 714 home runs there.

He entered the University of Alabama as a fifteen year old, and tried out unsuccessfully for the football team. He worked with the team as equipment manager and, later, as public address announcer for home games. His first broadcast was a football game, between Alabama and Tulane. He was recommended by coach Frank W. Thomas when WBRC-AM needed a play-by-play announcer, and started working in Birmingham for the station in 1933. He also completed his law degree and passed the state bar exam.

In 1937, the 24-year-old Allen, vacationing in New York City, auditioned at the CBS Radio Network as a staff announcer. He won a $45 a week job doing big band remotes and game show announcements, such as Truth or Consequences. On the air he "Americanized" his name to Mel Allen. His was the voice that broke into the Kate Smith program to announce the explosion of the Hindenburg. His vivid description of the 1938 Vanderbilt Cup yacht race led to his first baseball assignment, providing color commentary for CBS' broadcast of the 1938 World Series. When the Yankees and Giants finally began to allow radio broadcasts of home games, Allen was hired to replace Arch McDonald, who had come to New York from Washington D.C. Before his first Senators game, however, Allen was brought back to New York to be McDonald's assistant when Garnett Marks twice mispronounced "Ivory Soap" as "Ovary Soap" on the air. Within a year, McDonald was back in Washington and Allen was promoted to lead announcer. 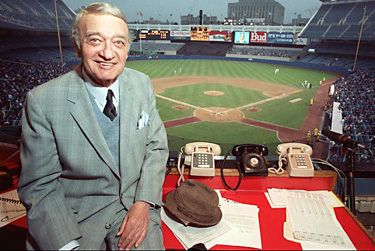 He was the main broadcaster for Yankees' games from 1939 through 1964 and became nationally known for his signature catchphrases following Yankee home runs: "Going, going, gone!" and, "How about that?" As the Voice of the Yankees, Allen chronicled many historic events in baseball, including Joe DiMaggio's 56-game hit streak in 1941 (which had to be recreated after the fact because there was no sponsor for live broadcasts that year), Don Larsen's perfect game in 1956, and Roger Maris' 61 home runs in 1961. He introduced Lou Gehrig and Babe Ruth for their respective farewell speeches, and invented the nicknames "Joltin' Joe" for Dimaggio, "Old Reliable" for Tommy Henrich, and "Scooter" for Phil Rizzuto.

In 1943, Allen entered the U. S. Army, stationed at Fort Benning, Georgia and broadcast on The Army Hour and Armed Forces Radio Service programs. He got the chance to call a few more Crimson Tide football games as well. While in the army, he officially changed his name to Mel Allen. After returning to civilian life in 1946, Allen resumed baseball announcing doing home and road games for the Yankees, providing national coverage for 15 of the next 18 World Series as well as calling 24 All-Star Games. In 1951 he broadcast the first nationally televised World Series and made the difficult transition to TV, where he was sometimes criticized, like many with a radio background, for talking too much during the games.

Allen was also familiar to audiences for his Movietone newsreels for Fox, his numerous boxing bouts, and also for his work on college football bowl games: (14 Rose Bowl, 2 Orange Bowls, and 2 Sugar Bowls.) Allen also served as play-by-play announcer for the NFL's New York Giants on WCBS Radio in 1960 - with some of the games also being carried by the CBS Radio Network.

Allen continued to broadcast Yankee games until 1964, when he was fired by Don Topping at the end of the season. Phil Rizzuto covered that year's World Series and Joe Garagiola began his career with the Yankee in 1965. Allen worked that season broadcasting Milwaukee Braves games in their future home of Atlanta. He spent some time doing piecework, including football games for the University of Miami, and tending to his other business interest, a Canada Dry ginger ale distributor. Then in 1968 he moved to Cleveland to announce for the Indians, a tenure during which he shocked the audience by reciting Longfellow's "Song of Hiawatha" in full during a particularly boring night with the hapless Indians.

This low-point in Allen's career was accompanied by all kinds of rumors. He virtually disappeared from the airwaves for the rest of the decade. Eventually, the Yankees invited him back to perform at special Yankee Stadium ceremonies, including emceeing "Mickey Mantle Day". He was inducted into the National Sportswriters and Broadcasters Hall of Fame in 1972.

Allen was welcomed back to the Yankees' on-air family in 1976 and joined the crew of SportsChannel (now Fox Sports Net New York) to announce Yankees cable telecasts along with the regular crew of Phil Rizzuto, Bill White, Frank Messer, and occasionally Fran Healy.

Allen remained with the Yankees' cable crew into the late 1980s. Among the memorable moments he called in that stretch were Yankee outfielder Reggie Jackson's 400th home run in 1980, and Yankee pitcher Dave Righetti's no-hitter on July 4, 1983.

This Week in Baseball

In his later years, Allen was exposed to a new audience as the host of the syndicated highlights show This Week in Baseball, which he hosted from its inception in 1977 until his death.

In 1978 Allen was one of the first two winners of the Baseball Hall of Fame's Ford C. Frick Award. (The other was his old MLB and CBS Radio colleague Red Barber, who for some time served alongside Allen as the Yankees' announcer after making his name with the Brooklyn Dodgers.) Allen was inducted into the American Sportscasters Hall of Fame in 1985, and the Radio Hall of Fame in 1988.

Mel Allen reached yet another generation of fans in 1994 when he recorded the play-by-play for two computer baseball games, Tony La Russa Baseball and Old Time Baseball, which were published by Stormfront Studios. The games included his signature "How about that?!" home run call, which he had first used almost fifty years earlier.

Allen never married and retired to a home in Greenwich, Connecticut. After his death in 1996 at age 83, he was buried at Temple Beth El Cemetery in Stamford. On July 25, 1998, the Yankees dedicated a plaque in his memory for Monument Park at Yankee Stadium. The plaque calls him "A Yankee institution, a national treasure", and includes his signature line, "How about that?"