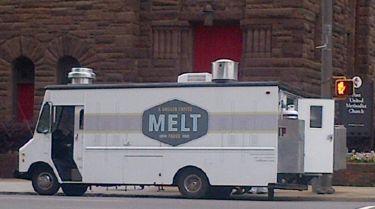 Melt is a restaurant and food truck owned by Paget Pizitz and Harriet Reis.

The Melt food truck began operating in 2012, making regular stops in downtown Birmingham in early 2013 as well as at various festivals in the area. Melt can also be hired as a caterer for events. Pizitz and Reis brought in chef Joey Dickerson to develop the menu, and he prepared a daily chef's special in addition to the normal grilled cheese menu. The truck is nicknamed "Matilda".

In 2013 the business began renovating the former Stephen's Garage on the corner of 41st Street and 4th Avenue South in Avondale for a full-service restaurant which opened in June 2014. Dungan Nequette Architects provided preliminary design sketches, and Say Jack Salvages completed the interior build-out. The space features recycled materials on the interior and a screened-in dining area under the former gas pump canopy.

In early 2019 Melt opened another location in downtown Huntsville. The chain expanded again in the summer of 2020, with its 3rd restaurant located at 5219 Peridot Place, Suite 3 in Hoover's Stadium Trace Village.