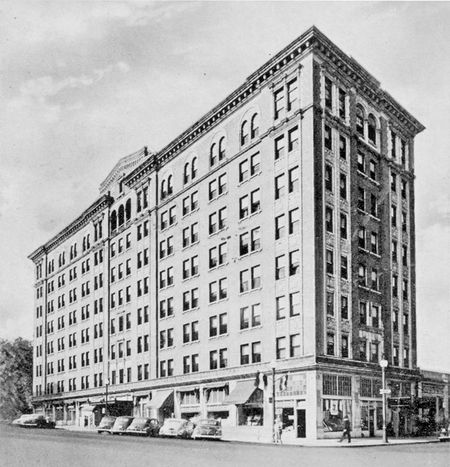 The Molton Hotel was a grand hotel located on the northeast corner of 5th Avenue North and 20th Street from 1914 to 1979.

Thomas Hunter Molton, president of the Molton Realty Company planned the new hotel on a piece of property given to his wife by her father, Charles Linn. The 200-room, eight story, 106-foot building was designed in a modified Italian Renaissance Revival style by architects Wheelock, Joy and Wheelock. The facade was clad in light-brown brick with terra-cotta detailing. The bracketed cornice was broken by a raised parapet and open arcade atop the center of the longer 20th Street side.

Though the hotel's terra-cotta nameplate bore the date "1913", the building was actually completed in early 1914. The opening was further delayed until after that of the Tutwiler Hotel down the street so that Molton could claim that his was the newest grand hotel in the city. The Blossom Shop florist operated from the lobby.

Manager of the hotel in 1948 was Arthur Kirkby. In 1951 a music historian tried to sue the hotel for the theft of a manuscript she was working on about 18th century music.

In the late 1950s the hotel sued the Birmingham Elevator Appeals Board for their decision that the hotel would have to replace its original open-style elevators with modern fully-enclosed models.

The hotel was home to a string of Chinese restaurants and to the RFD Lounge. It also housed an office of Eastern Airlines and the Pronto Press.

The hotel lost money for its last several years. Despite the efforts of "Citizens to Preserve the Molton Hotel" led by Bob Stewart, the building was demolished by Canal-Randolph in late 1979 for construction of the Financial Center Building.