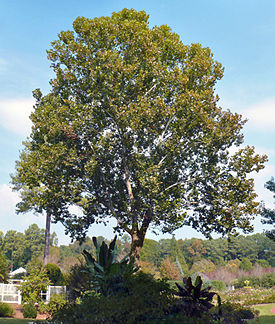 The Birmingham moon tree in October 2010

A Moon Tree is any one of hundreds of trees grown from the 400-500 seeds that orbited the moon aboard Apollo 14's command module in February 1971. The seeds were carried by astronaut Stuart Roosa, who had previously worked as a "smoke jumper" for the U. S. Forest Service. The research program on the effects of weightlessness on seed germination and growth was sponsored jointly by NASA and the Forest Service. Saplings grown from the seeds were distributed to state forestry organizations and donated to other institutions in celebration of the American Revolution Bicentennial in 1976. Seven were planted in Alabama, and four are still living. No more than 59 of the trees planted worldwide remain alive and accounted for.

A tree planted at Auburn University no longer survives

Birmingham's Moon Tree is an American sycamore (Platanus occidentalis) planted at what is now the Blount Plaza at the entrance to the Birmingham Botanical Gardens during Arbor Week in April 1976.

A tree planted at the U.S. Space and Rocket Center no longer survives.

A Loblolly pine (Pinus taeda) was planted on the grounds of the Alabama State Capitol in April 1976.

A Loblolly pine was planted at the Pioneer Museum of Alabama in Troy on August 5, 1976.

A tree planted at the Tuskegee VA Hospital no longer survives.