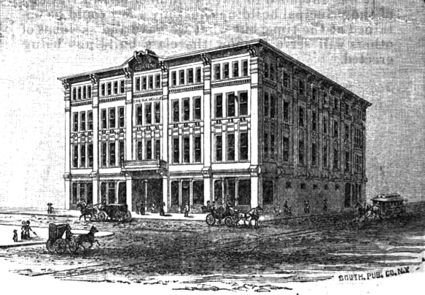 O'Brien bought the property, 125 feet of frontage on 1st Avenue then occupied by a sawmill operated by Thomas Jeffers and George Thomas in 1878, paying what was considered an exorbitant sum of $500. Construction of his palatial four-story brick theater building commenced in May 1882 and was completed that November. He purchased brick from T. M. D. Erhart's yard south of Bessemer and lumber from a yard at Avenue A and 17th Street. In addition to the 2nd-floor auditorium, 49 feet from side to side with a 36-foot deep stage open to a 28 1/2-foot wide proscenium, the building housed a hotel and ground floor shops such as George Pappa's saloon and the Dunnam Brothers grocery store. The hall utilized gas burners, incandescent lights, and arc lights.

The inaugural performance at the Opera House was a production of Charles Barras' The Black Crook staged on November 14, 1882 by the Huntley, Blaisdell and Brown Company. Under O'Brien's management the hall featured "high-brow" dramatic and musical performances. Entertainers who graced the stage included Joseph Jefferson, Edwin Forrest, Roger Busfield, Roe Coglan and the Thatcher, Primrose and West minstrels. A new tile floor for the lobby was installed as a gift from Charlie Pierce, builder of the new L & N Station, in November 1886.

The venue was also used as a meeting house for many different groups. The Birmingham Chamber of Commerce was organized at the O'Brien on May 14, 1887. The Sunday School Board of the Southern Baptist Convention was created during a conference at the O'Brien on May 11, 1891. Later that year, Augustus Thomas' critically-acclaimed debut, Alabama, was staged at the Opera House by A. M. Palmer's company. Local reviewers found the story line, which took place in Reconstruction-era Talladega, to be historically incorrect. In 1892 Henry Mapleson's Opera Company of London, England came to Birmingham to stage Fadette an adaptation by Tito Mattei of Aimé Maillart's "Les dragons de Villars" (itself based on Georges Sand's novel "La Petite Fadette"), which starred Laura Mapleson and Charles H. Drew. The Deshon Opera Company were residents at the Opera House during the 1893 season, and Sam T. Jack's Creole Burlesque Company caused a sensation that October with its primarily African-American cast.

The ground floor of the Opera House building was used for retail stores. Samuel Ullman's hardware business and the Eubanks Brothers dentistry office were located there.

In 1895 Charles Whelan purchased the theater at a mortgage sale. He retained long-time manager Ben Theiss and music director Fred Grambs and enlarged the stage. In December 1898, Whelan's death led to another sale. A. L. Fulenwider and Henry Badham purchased it from his estate for $60,000 and embarked on a major overhaul, which included lowering the stage to the ground floor and remodeling the hotel. Theiss and Grambs were retained as lessees. They, in turn, sold the theater on March 28, 1899 to Joseph R. Smith, Jr and Charles J. Smith for $75,000. At the same time, Theiss and Grambs lost their lease and the Jefferson, Klaw and Erlanger firm of New York took over management.

The Jefferson Theatre opened nearby on 2nd Avenue North in March 1900. Many of the vaudeville shows and group meetings that would have played the O'Brien moved to the newer hall. In 1905 the Columbia Amusement Company secured a lease on the theater and installed huge electrified signs across 1st Avenue North and 19th Street to advertise its newly-renamed Gayety Theatre. Manager E. A. McArdle circumvented the city's new ordinance against burlesque entertainments simply by not using that word in his advertising. Nevertheless, on January 5, 1909 Birmingham Police detective George Bodeker issued a formal warning: "I like to see a good show and enjoy it, but at the same time I will not tolerate any such movements as I saw this afternoon and I assure you that if this occurs tonight, I will most assuredly put the entire troupe under bond." Under increased scrutiny, the theater closed on April 17 of that year. 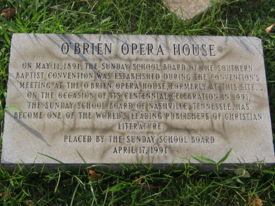 On May 3, the theater was reopened as the O'Brien Opera House again, but the next season it changed its name to The Virginia. The Shubert Organization acquired the lease in 1910, renaming the hall The Shubert Theater and refurbished it for a return to grand entertainment. The new management was so successful that they occassionally had to lease the larger Orpheum Theater for certain programs, such as Bessie Abott's performance in Puccini's "La Bohème" (a tour that finally succumbed to poor receipts and completed its run in Birmingham). Despite the theater's newfound success with "legitimate" theater, the Birmingham Fire chief declared the building unsafe on May 31, 1911. It was never reopened, and was finally torn down in 1915.

A marker, donated by O'Brien's daughter Bossie and then-property owner Ellen Hickman, was erected on the site of the former opera house in 1950.