This article is about the cemetery in Birmingham. For others, see Oak Hill Cemetery (disambiguation). 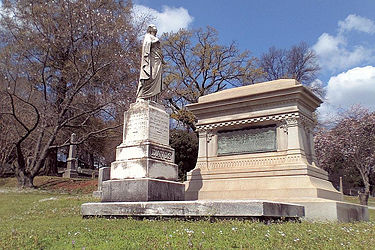 Oak Hill Cemetery, located between 17th and 19th Streets and 11th Avenue and 13th Court North in Fountain Heights, is Birmingham's oldest and most distinguished cemetery. Originally 21½ acres on the estate of James M. Ware, it was already being used as a burial ground by April 1869 when it served as the resting place for the infant daughter of future mayor Robert Henley. It was marked as "City Cemetery" on the original plats for Birmingham laid out by the Elyton Land Company and was formally sold to the city on December 29, 1873 for the sum of $1,073.50.

Most of the 11,000 or so burials at Oak Hill were interred before 1905, including many early mayors, a Revolutionary soldier, numerous Civil War veterans, and the first male child born in the city. The earliest marker memorializes Jesse Thompson, the father of Mayor B. A. Thompson. Although few records exist from the time, most believe the "Potter's Field" section was also used as the final resting place for many victims of the 1873 cholera epidemic.

The Birmingham City Directory in 1883 states the established price of burial lots as three cents per square foot. It also warns that while no one will be forced to pay for a plot in advance of burial, if payment is not received within 60 days after death, the lot reverts back to the city. In such cases the body would be removed and reburied in the pauper burial ground.

In 1889 Judge A. O. Lane purchased 200 acres on the southern slopes of Red Mountain, now Lane Park, for the burial of paupers, thereby ending the use of Oak Hill's "Potter's Field". In 1928 the caretaker's cottage near the center of the property, was removed to the southwest corner of the cemetery and a new "Pioneer's Memorial Building" was constructed of Indiana Limestone, designed by Miller & Martin Architects with William Kessler, landscape architect.

Since 1913 Oak Hill has been under the care of the Oak Hill Memorial Association, a group created to preserve and maintain the monuments, grounds, and records of the cemetery. The New Deal-era Works Progress Administration carried out improvements to the cemetery in the 1930s. Later that same decade, vandals damaged the Grand Army of the Republic monument, which had been erected in 1891.

In 1977, Oak Hill Cemetery was added to the National Register of Historic Places. The Oak Hill Memorial Association keeps an office in the former caretaker's cottage and published a quarterly newsletter, the Oak Hill Pioneer, from Winter 1999 to Fall 2001, with articles about the history of the city in the context of the lives of those buried at Oak Hill. 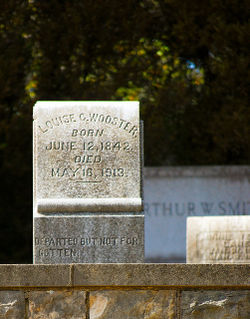