From Bhamwiki
(Redirected from Regions Park)
Jump to: navigation, search 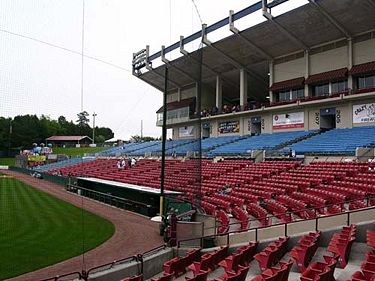 In 2021 Hoover built a new restroom facility and storm shelter at the complex’s baseball and softball fields located north of the stadium. The tornado shelter accommodates approximately 100 people. The Hoover City Council put $200,000 in the 2020 budget for the project, and appropriated another $150,000 for completion in 2021. The shelter is a prefabricated building, requiring minor site preparation, and was in place before the SEC Baseball Tournament in May.

The stadium served as the host for softball games played as part of the 2022 World Games on July 8 through 13. 2022. Hoover provided the stadium at no cost to the World Games, and provided personnel, police protection, and hospitality suites. The playing surface was also converted to a softball surface for a cost of approximately $150,000 including labor costs.