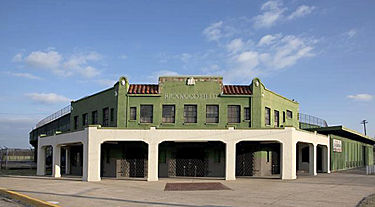 Entrance to Rickwood Field in 2010 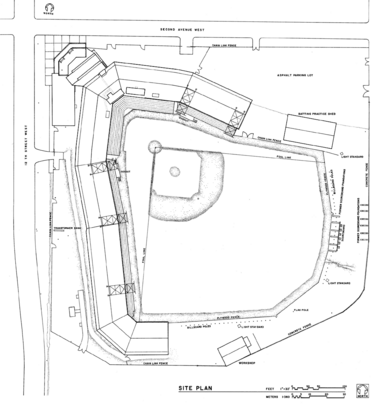 Rickwood Field, located at 1137 2nd Avenue West, at the corner of 12th Street West in Rising-West Princeton, is the oldest surviving professional baseball park in the United States. It was built for the Birmingham Barons in 1910 by industrialist and team-owner Rick Woodward and served as the home park for the Barons and for the Birmingham Black Barons of the Negro Leagues. The Barons moved their home games to the Hoover Metropolitan Stadium in 1987. Since then, Rickwood Field has been preserved and is undergoing continual restoration. A museum to house the Negro and Southern Leagues Hall of Fame has been proposed for a site next door to the park.

The Birmingham Coal Barons baseball team began playing professionally in 1887, with their home games at an informal park called "Slag Pile Field" in West End. In 1901 they joined the Southern Association.

A. H. "Rick" Woodward, chairman of Woodward Iron Company and grandson of pioneer Birmingham industrialist Stimson Woodward, purchased a majority share of the Birmingham Coal Barons baseball team from William McQueen in 1909 while he was still in his 20s. Immediately he began planning a grand showplace for his new team. He contacted Connie Mack for advice on the details, including the field dimensions, which were made similar to those of Shibe Park in Philadelphia (later renamed Connie Mack Stadium). He purchased land in the West End neighborhood of Birmingham from the Alabama Central Railroad. The $75,000 structure was designed by Southeastern Engineering Company of Birmingham (a short-lived subsidiary of Pittsburgh's General Fireproofing Company) and completed during the summer of 1910. The 12.7 acre park was flanked along the basepaths by concrete and steel stands. A tile-roofed cupola on the roof behind home plate provided space for the announcer and the press. A newspaper contest produced the name of the stadium, taken from Woodward's first and last names. 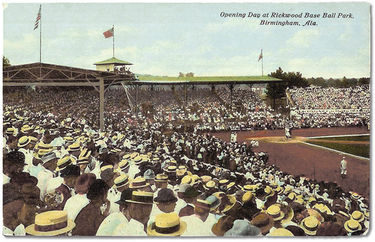 Opening day on August 18, 1910, was celebrated by businesses closing all over town to allow fans to fill the park for the first pitch at 3:30 P.M. Over 10,000 people attended that first game in which the Barons defeated the visiting Montgomery Climbers 3-2. Throughout the first half of the 20th century Rickwood Field hosted sellout crowds for the Barons and the Black Barons who played on alternate weekends.

In 1912 a spring tornado tore through the field, pulling up the outfield fence. Two years later Woodward felt the need to have electric fans installed in the grandstands for the comfort of the crowd. On February 1, 1913 the stadium hosted a soccer match between "All-Star" teams from Atlanta, Georgia and the Birmingham District. Birmingham won 4-0. On August 18, 1915 Rickwood hosted a "Suffrage Day" 1-inning game between all-female baseball teams from Birmingham and Bessemer in support of the Alabama Equal Suffrage Association. Carlton Molesworth served as umpire.

During the 1920s Rickwood Field also hosted college football games. In 1921 the outfield fence was damaged in a tornado and quickly rebuilt. In October 1924 the Robert E. Lee Klan No. 1 hosted a rally which filled the grandstands with more than 23,000 people. Attendees saw an effigy of Senator Oscar Underwood buried under the platform at center field.

In 1924-1927 the infield bleachers were covered with a steel-framed roof designed by Denham, VanKeuren & Denham, Architects of Birmingham. Shortly after, In 1928 a new Mission style entry structure with offices was built to the designs of Paul Wright & Co., Engineers of Birmingham. A new concrete outfield wall replaced the original fence.

In 1931 in the first game of the Dixie Series championship, Birmingham's 43-year-old Ray Caldwell outpitched 22-year-old Dizzy Dean, who had guaranteed a win. The Barons won the series 4 games to 3. In 1936, at the suggestion of Woodward's son-in-law Jim Burt, four monumental steel-frame light towers designed and fabricated by the Truscon Steel Company of Youngstown, Ohio were erected, allowing for night games. The gamble paid off with a surge in attendance.

On February 7, 1938, Woodward sold the park to Ed Norton, a local businessman, for $175,000. In 1940 Norton sold it to the Cincinnati Reds. Under their tenure, new outfield fences were built inside the original walls to reduce the field dimensions for the 1941 season.

Rickwood hosted game 7 of the 1943 Negro World Series between the Black Barons and Homestead Grays. 10,000 fans packed the stands to see what turned into a pitchers' duel between Johnny Markham and Roy Partlow. Ed Steele drove in Leonard Lindsay in the 11th to tie the series at 3-3. The Grays went on to win the series in Game 8 at the Crampton Bowl in Montgomery two days later.

Birmingham restaurateur Gus Jebeles purchased the Barons and their home park in 1944. The ballpark hosted the Ringling Brothers & Barnum and Bailey Circus in October 1945. A ladies' rest room was added and the outfield fence reduced again in 1948. In 1949 ownership changed hands again, going to a partnership of Al DeMent, Al Belcher, and Rufus Lackey. They added a small Dugout Restaurant in the entrance building in 1950 and installed additional box seats, necessitating the relocations of the dugouts farther down the baselines. In 1958 Belcher gained a majority share and control of the park.

Following the 1961 season, the Southern Association folded and, for the first time in 52 years, there would be no professional baseball at Rickwood. A proposal was floated for the City of Birmingham to purchase the facility and adapt it for use as a high school football stadium, but that idea was not pursued.

Instead, Belcher bought up the remaining stock in the stadium. Later that year he teamed up with Kansas City A's owner Charlie Finley to bring the Barons back for the 1964 season as a AA team in the newly-formed Southern League. Belcher had the stadium refurbished and painted in the new team colors of green and gold. Finley served as honorary bat boy for the first three innings of the Barons' opening night loss to the Asheville Tourists.

In 1964, General Manager Glynn West purchased 1000 wooden seats from New York's Polo Grounds and installed them at the park.

After declining attendance in the 1965 season, Belcher suspended play for the 1966 season, and Finley transferred his AA franchise to Mobile. Belcher put the park up for sale for $500,000 and threatened to demolish it for the salvage value. In 1966 he reached an agreement with the City of Birmingham, retaining a lease for the remainder of that year.

Later in 1966, the lease was transferred to Finley, who brought Kansas City's AA farm team back to Birmingham for the 1967 season, dubbed the "Birmingham A's". That year is also remembered for the day that 14,000 disappointed fans were sent home early when the Atlanta Braves vs. Southern League All-Stars exhibition game was called "on account of tornado." Neighborhood complaints led the Park & Recreation Board to prohibit rock concerts at the stadium in 1973.

After increasingly dismal attendance numbers, the [now] Oakland Athletics ended its affiliation with Birmingham following the 1975 season. Except for the abortive 5-game run for the Freedom Baseball League's Alabama Barons on July 2-4, 1978, the stadium went six more years without a home team. Between 1979 and 1980 the wooden seats were replaced with plastic seats in the box areas and metal bleachers under the grandstands.

In 1981 Art Clarkson brought minor league baseball back to Rickwood. Clarkson purchased the Detroit Tigers' AA affiliate Montgomery Rebels in the Southern League and moved them to Birmingham, renaming them the Barons. Clarkson also had a new electronic scoreboard installed at the park. The Barons would change affiliations in 1985 to the Chicago White Sox, and would remain in Rickwood until 1987.

In 1987 the Barons moved to the new Hoover Metropolitan Stadium, in the suburb of Hoover.

Since 1992 the ballpark has been under the care of the Friends of Rickwood who are slowly but surely restoring each part of the facility while also hosting frequent amateur, police and semi-pro games and opening the gates to frequent visitors who can walk in any day and explore the grandstands or run the basepaths.

Every summer since 1996, Rickwood Field has hosted the Barons for a "throwback game" in which both teams wear period uniforms. Each Rickwood Classic has honored a different era in Birmingham baseball history.

Still from "Cobb", with Roger Clemons on the mound portraying Ed Walsh and Tommie Lee Jones as Ty Cobb, about to steal third.

Scenes from the films Cobb (1994) and Soul of the Game (1995) were filmed at Rickwood Field. Those productions contributed to the recreation of the scoreboard and pressbox, and the addition of 1940s period style advertisements on the outfield fence. Some of these retro-style ads have been sponsored by real Birmingham businesses, including a section sponsored by the descendents of Rick Woodward advertising long-gone Woodward Iron Co. The outfield signs were designed by Ted Haigh, a Los Angeles-based graphic designer and executed by Skidmore Sign Company of Birmingham.

As of 2005, the Friends of Rickwood had spent around $2 million refurbishing the grandstands, pressbox, locker rooms, roof and main entrance to the park. In December 2007 Birmingham mayor Larry Langford said he wanted to begin discussing the creation of a Negro and Southern Leagues Hall of Fame celebrating the contributions of African-Americans to the sport of baseball. In April 2009 he unveiled a proposal for a $7.5 million project that would include construction of the museum, additional renovations to the historic ballpark, and a skywalk connecting the two. City funding for the project was approved in May and contracts with Davis Architects for the renovations and with Exford Architects for the museum were approved in July. A ceremonial groundbreaking was held on August 12.

ESPN Classic broadcast a re-enactment of a Negro League game played at Rickwood on February 26, 2006. It featured teams wearing the uniforms of the Bristol Barnstormers and Birmingham Black Barons.

In 2014 Alagasco donated salvaged materials from the demolition of the downtown Birmingham Southern Railroad freight depot for use in reconstructing the stadium's batting building. Rickwood Field was set to receive $500,000 for facility upgrades from the city's "Phase II Bond Projects" in 2016. That money was instead used for emergency repairs to the structure. The Birmingham City Council approved a $1 million no-bid contract for J. J. Morley Enterprises to perform the repairs in early 2018.