Rosenberger's Birmingham Trunk (formerly Rosenberger's Birmingham Trunk Factory) is a family-owned retailer specializing in luggage, leather goods and travel items. The company was founded in Birmingham in January 1897 by J. D. Rosenberger and began using the image of an elephant with a foot resting on one its trunks, usually in red, as early as 1905. Originally just a manufacturer, located at 315 19th Street North, the company expanded and opened a showroom at 1909 2nd Avenue North in the 1920s. 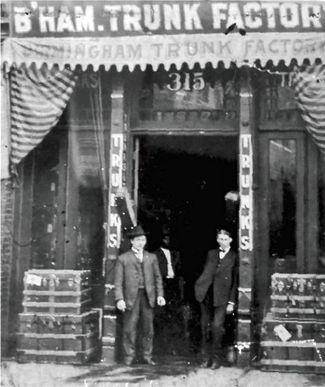 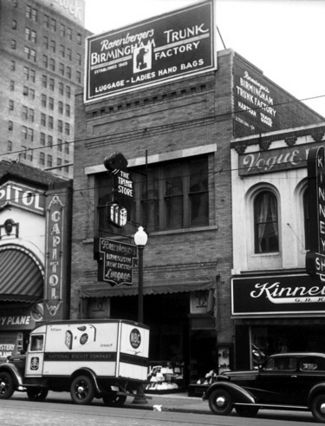 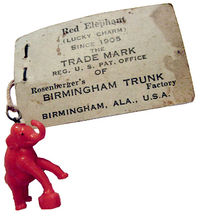 One of Rosenberger's "charms", claimed as the origin of Alabama's elephant mascot
.

One version of the origin of the Alabama Crimson Tide's elephant mascot is that Rosenberger, whose son was a student at the university, outfitted the 1926 Alabama Crimson Tide football team with red celluloid elephant-shaped "good luck" luggage charms for the train trip to Pasadena, California for the 1927 Rose Bowl. Reporters greeting the team on their arrival took note of the distinctive tags. Syndicated columnist Grantland Rice was the one credited with coining the phrase "Here come the red elephants of Alabama." (Another story dates the association to an October 1930 column by Atlanta Journal sportswriter Everett Strupper.) When the 1930 team returned to the Rose Bowl, the company supplied leather suitcases, paid for by the Alumni Association, for each team member. The firm's association with Alabama football continued into the Bear Bryant era as the legendary coach provided the members of his 1961 championship team with Hartmann cowhide suitcases from Rosenberger's in lieu of rings.

J. D., who died in 1945, passed the company to his son, Mel. He opened the company's first suburban stores, first experimenting with temporary holiday shops in Homewood and Crestline before opening a full-time showroom at Mountain Brook Village in 1950. The company also opened stores in Roebuck and Eastwood.

His wife, Mae joined the business in 1955 and took over when Mel died in 1971. Mae and her son, Ken operated the business until shortly before her death in June 2010. They moved the store into Brookwood Village when the mall opened in 1974, then added another second location at the Riverchase Galleria in the 1980s. The Galleria store moved to The Summit in 2006. In January 2013 the business was consolidated by moving the retail showroom to 2712 19th Street South in downtown Homewood, where Rosenberger's had kept some warehouse space since 1981.