This article is about the former Acting Governor. For others with the same name, see Russell Cunningham (disambiguation). 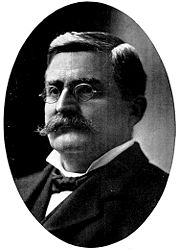 Russell McWhorter Cunningham (born August 25, 1855 in Lawrence County; died June 6, 1921 in Birmingham) was the acting Governor of Alabama during the absence of William Jelks in 1904 – 1905.

Cunningham was the son of Moses W. and Nancy Caroline Russell Cunningham of Lawrence County. He was educated in the county's common schools and taught grade school and worked a farm to earn money to continue his studies. John M. Clark sparked his interest in medicine and taught him some rudiments of practice beginning in 1871. Cunningham enrolled at the Louisville Medical College in Kentucky in 1875. He then attended the Bellevue Medical College in New York City where he earned his doctoral degree. In 1876 he married the former Sue Moore of Franklin County, with whom he later had a son, Moses.

He returned to Alabama and practiced at Newburgh before being appointed surgeon at the State Penitentiary at Wetumpka in 1881. Following a great need for his services, he removed to the Pratt Mines Prison at Pratt City. While there he produced the first statistical reports on the morbidity and mortality of African-American convict laborers working in the state's mines. He instituted medical reforms that helped decrease the mortality rate of convicts from 18% per year to less than 3%.

In 1885 Cunningham was hired Tennessee Coal, Iron and Railroad Company to serve a physician and surgeon for the Ensley Works. He also held a similar position with the Alabama Steel and Shipbuilding Company and maintained a private infirmary in Ensley until his retirement.

Among Cunningham's other contributions to medical scholarship are reports on "croupous pneumonia", bone fracture, tuberculosis, and gynecology in general practice. He served as president of the Jefferson County Medical Society, the Alabama Medical Association, and the Tri-State Medical Association and taught as a professor of principles and practice at the Birmingham Medical College.

Cunningham represented Franklin County in the Alabama House of Representatives from 1880 to 1881 and served in the Alabama State Senate from Jefferson County from 1896 to 1900, presiding over that body from 1898 until the end of his term. He was a delegate to the Convention that drafted the Alabama Constitution of 1901 and also held a position as president of the Ensley School Board. In November 1902 he defeated Charles Lane of Huntsville to become the first Lieutenant Governor of Alabama under the new consitution. In that role he served as Acting Governor from April 25, 1904 to March 5, 1905 while William Jelks was out of state seeking treatment for tuberculosis.

Cunningham was Grand Master of the Grand Lodge of Alabama, Ancient Free and Accepted Masons, from 1900 to 1902 and was also Grand Commander of the Knights Templar of Alabama. He died in 1921 and is buried at Elmwood Cemetery.