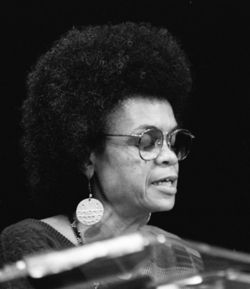 Sonia Sanchez (born Wilsonia Benita Driver on September 9, 1934 in Birmingham) is an African American poet most often associated with the "Black Arts Movement". She has authored over a dozen books of poetry, as well as plays and children's books.

Wilsonia Driver was born in 1934 to drummer Wilson Driver and his wife Lena. She was named for her father. Her mother died a year later during childbirth and Wilsonia and her sister went to live with their father's mother, Lizzie Driver. After the grandmother died in 1940, the sisters were bounced around between family and friends, eventually moving to Harlem, New York in 1943 where Driver was living with his third wife.

Sanchez attended Tuggle Elementary School in Birmingham and completed her primary education in New York public schools. She went on to earn a Bachelor of Arts in Political Science from Hunter College in 1955, where she had also taken several creative writing courses. Sanchez completed postgraduate work at New York University where she studied poetry with Louise Bogan. After graduation she formed a writers' workshop in her Greenwich Village neighborhood and joined with three fellow poets to form the "Broadside Quartet". She began teaching, at NYC's Downtown Community School, in 1965.

A short marriage to Puerto Rican Albert Sanchez gave her the name she has used professionally ever since. In 1968 she married poet Etheridge Knight, who had attended her writers' workshop. She had three children with him (Anita, Morani Neusi and Mungu Neusi) before they were divorced.

Sanchez is known for her many plays and books exploring the struggles and lives of Black America. In the early 1960s, Sanchez was a member of Congress for Racial Equality and became an influential advocate for the Civil Rights Movement as well as the Black Arts Movement. Influenced by Malcolm X, she gradually adopted more seperatist politics, which surfaced in her earliest published work. She joined the Nation of Islam in 1972, but left the organization after three years over conflicting views on women's rights.

Sanchez was also an early proponent of "African American studies", having created the first academic course on black women and literature and advocating for "Black Studies". She was tenured at San Francisco State College and taught subsequently at Pitt, Rutgers, Ameherst and Penn. She accepted the first Presidential Fellowship to teach at Temple University in Philadelphia in 1977 and remained there for the rest of her career, holding the Laura Carnell chair until her retirement in 1999. She remains a poet-in-residence at Temple. In all she taught at eight universities and has read and lectured at over 500 colleges in the United States. She has also read her poems in Africa, the Caribbean, China, Australia, Europe, Nicaragua, Canada and Cuba.

Sanchez won the 1969 P.E.N. Writing Award for her early poems. She also won the National Academy and Arts Award and the National Endowment for the Arts Fellowship Award in 1978-1979. In 1985, she was given the American Book Award for Homegirls and Handgrenades. She has also been awarded the Community Service Award from the National Black Caucus of State Legislators, the Lucretia Mott Award, the Pennsylvania Governor's Award for Excellence in the Humanities, and the Peace and Freedom Award from the Women's International League for Peace and Freedom. She was inducted into the inaugural class of the Alabama Writers Hall of Fame in 2014.

Sanchez has edited two anthologies on Black literature, We Be Word Sorcerers: 25 Stories by Black Americans and 360° of Blackness Coming at You. She continues to call Philadelphia home.