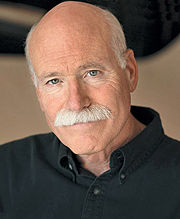 Tobias Jonathan Ansell Wolff (born June 19, 1945) is a well-known writer of short stories, novels and memoirs and a professor of English at Stanford University.

Born in post-war Birmingham, but raised in the Skagit River Valley of Washington, Wolff detailed his childhood in the memoir This Boy's Life (1989) which was made into a film starring Leonardo DiCaprio, Robert DeNiro and Ellen Barkin. His subsequent memoir, In Pharaoh's Army (1994) records his 1967 tour of duty in Vietnam.

Wolff attended the Hill School in Pottstown, Pennsylvania and, after four years in the U. S. Army, earned a degree in English from Hertford College, Oxford (1972). He went on to receive an M.A. from Stanford. Early in his writing career he spent time as a journalist for the Washington Post. In 1975, he was awarded a Wallace Stegner Fellowship in Creative Writing at Stanford. Wolff's mother, having settled in Washington DC, eventually became president of the League of Women Voters.

Wolff is the Ward W. and Priscilla B. Woods Professor in the School of Humanities and Sciences at Stanford, where he has taught classes in English and creative writing since 1997. He also served as the director of the Creative Writing Program at Stanford from 2000 to 2002. Prior to that, Wolff taught for some time at Syracuse University.

Tobias Wolff is married and has three children. His older brother Geoffrey (born in Los Angeles) is also an author and professor.