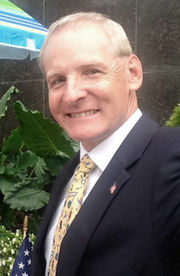 Charles Todd Henderson (born July 18, 1964 in Valley, Chambers County) is an attorney and former law enforcement official who was elected as a Democrat for Jefferson County District Attorney in the 2016 general election. Shortly before he was to take office, however, he was arrested and charged with perjury. The indictment triggered an immediate suspension. He was convicted of the charge at trial in October 2017.

Henderson, an Eagle Scout, earned his bachelor's degree at Samford University in 1987 and a master's in forensic science at UAB in 1991. He began his law enforcement career as a deputy in the Jefferson County Sheriff's Office in 1988 and then joined the Fairfield Police Department in 1993 as an officer and evidence technician. In 1996 he was assigned to work as part of a federal Drug Enforcement Agency task force. In 1998 he was fired by then-Fairfield mayor Larry Langford for "conduct unbecoming an officer" when he shoved the husband of his ex-wife at his workplace in Tuscaloosa while in his DEA uniform. He challenged the termination in court and the case was settled confidentially.

Henderson returned to the Jefferson County Sheriff's Office in 2000 and completed his juris doctorate at the Birmingham School of Law in 2002. He worked as a judicial law clerk in the 18th Judicial Circuit of Alabama and as a member of the Lipscomb Police Department in 2002. He began his private law practice in 2003 and specialized in representing veterans in claims for government benefits. He was given the Alabama State Bar Association's "Pro Bono Award" for his commitment to representing clients regardless of their ability to pay.

While practicing law, Henderson also completed high school teacher certification through East Carolina University in 2014. He has worked as a bus driver and special education teacher and coach at Shades Valley High School and in Montgomery City Schools. He also took on the roles of special counsel to the Mayor of Brighton, to the Veterans Network Community and FERS Group Inc. in 2014 while also serving on the executive committee of the Jefferson County Democratic Party. He ran for Jefferson County Sheriff in the 2014 Democratic primary, losing to Wallace Anger. In 2016 he successfully challenged Republican Brandon Falls for election to the District Attorney's office.

In his campaign, Henderson promised to "restore accountability" to the office; specifically by studying the office's approach to prosecutions statistically and to seek partnerships with other community resources to combat crime and reduce prison sentences.

Alabama Attorney General Luther Strange's office investigated a complaint from the Alabama State Bar alleging that Henderson perjured himself during a civil case before Judge Patricia Stephens in September 2016. In the case of Charbel Akl v. Yareima Carmen Valecillos Akl Henderson had been appointed by Judge Stephens to represent the interests of the couple's child. The father's attorney, however, moved to have him removed as Guardian Ad Litem due to the fact that the mother had been involved in Henderson's political campaign. Stephens did remove him from the case, but the issue of his connection with the mother and whether it was a romantic relationship resurfaced at trial in September. Guardianship was awarded to the father while the case proceeded. Assistant Alabama Attorney General Matt Hart convened a special grand jury which returned the indictment. Deputy District Attorney Danny Carr was sworn in as District Attorney Pro Tem. Following Henderson's conviction, Governor Kay Ivey appointed a replacement to fill his term.

Henderson lives in Pleasant Grove and is an active member of the Church of the Highlands. He has volunteered with the Village Creek Society, Shepherd's Fold, the Dannon Project, Woodlawn's Dream Center, his church's prison ministry and many other causes. He is divorced and has two sons, Jared and Nathan.