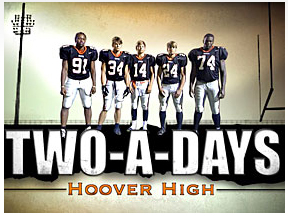 Two-A-Days was a half-hour reality television show produced by Dave Sirulnick and Amy Bailey of Atlanta-based Humidity Entertainment and aired for two seasons on MTV.

The first season chronicled the 2005 Hoover High School football team. The show was filmed during the football season and premiered a year later, on August 23, 2006. A premiere party was held at the Rave Patton Creek cinema. Through its first three weeks, the show attracted an average of 1.87 million viewers, finishing the season with 64 million.

Remote Productions, Inc., an MTV affiliated company, signed a contract from the Hoover Board of Education that allowed it to pursue two additional seasons. On September 27, 2006 they announced that a second season would be produced, beginning with Hoover's September 29 game at the Hoover Met against John Curtis High School of River Ridge, Louisiana.

While the first season stirred up local controversy over the propriety of exhibiting teenagers on television, the role of the team's chaplain at a public school, and the use of vulgar language by the coach and players; the second season's only real controversy was over the demonizing of Hoover's rival, Vestavia Hills High School.

Due to controversy and the subsequent firing of Coach Propst, Humidity Entertainment declined to pick up its option to film a third season at Hoover.