Difference between revisions of "University of Alabama at Birmingham"

UAB offers programs of study leading to bachelor's, master's, doctoral and professional degrees in various fields, including social and behavioral sciences, liberal arts, business, education, engineering, health-related fields (such as medicine, dentistry, optometry and nursing) and public health. The school is highly renowned for its medical research and natural sciences programs. UAB received over $390 million in federal grants during the past fiscal year for research purposes. This places the school as one of the larger research institutions in the Southeast. In fact, UAB is currently 3rd in the Southeast for NIH research funding behind only Duke University and the University of North Carolina at Chapel Hill. UAB Hospital also sponsors residency programs in various medical specialties, including internal medicine, surgery, radiology, and anesthesiology. UAB Hospital is the only Level I trauma center in Alabama, as rated by the American College of Surgeons.

UAB began in 1936 as the Birmingham Extension Center of the University of Alabama. Because of the rapid growth of the Birmingham area, it was decided that an extension program for students who had difficulties which prevented them from studying in Tuscaloosa was needed. In 1945, the University of Alabama School of Medicine moved from Tuscaloosa to Birmingham, and took over management of Jefferson and Hillman Hospitals in Birmingham (now known as UAB Hospital).

In 1966, the Extension Center became the College of General Studies and the School of Medicine were merged as the degree-granting University of Alabama in Birmingham. (The "in" in the name was replaced with an "at" in 1984.) The new university was still a branch of the main campus in Tuscaloosa, headed by "Vice President for Birmingham Affairs" Joseph Volker.

Birmingham's civic leaders lobbied the legislature and Alabama's board of trustees to grant the urban campus more autonomy. The result was the "University of Alabama System", which was formed in 1969 with three autonomous campuses governed by one board of trustees. Governor Albert Brewer announced the change on June 16, 1969 and appointed Volker president of the university. Volker was named the first chancellor of the system in 1976.

In 1972 the UAB Police Department was formally organized with Thomas C. Seals as the first chief of police.

In 1976 Volker secured another 45 blocks of Southside and Titusville for future expansion, purchasing the land for $8.8 million from the Birmingham Housing Authority.

UAB is located on approximately 100 blocks in the Southside community of Birmingham. There are two unofficial, however distinct areas of campus, the medical center district and west campus. The medical center which is located on the east and north sides of campus closest to downtown contains buildings mostly dedicated to healthcare, research, and support of those enterprises. Also located in the medical center district are non-UAB hospitals, such as the VA Medical Center Birmingham, Children's Hospital of Alabama, and Cooper Green Mercy Hospital. The west campus area covers the western area of campus near Interstate 65 and the Glen Iris and Southside neighborhoods. It is mostly dedicated to the non-health related schools, student housing, and athletic facilities. The west side of campus is sometimes referred to the undergraduate side of campus, as most of UAB's postgraduate student population resides in health-related fields.

Since 1969, UAB has undergone extensive growth and is sometimes jokingly referred to as "The University that Ate Birmingham" and construction projects are common across campus. Current projects that are in planning, recently completed, or under construction include:

UAB has seven dormitories on campus:

UAB offers nearly 140 degrees at both the undergraduate and graduate levels in 11 schools and the UAB Graduate School. 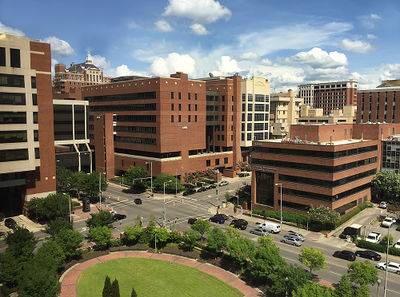 A portion of the UAB Medical Center in 2016

Managed by the UAB Health System through management agreements are UAB Medical West Medical Center in Bessemer, and Baptist Health of Montgomery. UAB also has affiliations with the Birmingham VA Medical Center, Children's Hospital of Alabama, and Huntsville Hospital in Huntsville.

The UAB Blazers are the forest green and old gold-swathed athletic teams at UAB. The school is one of the fourteen member institutions of Conference USA and participates in Division I: Football Bowl Subdivision of the NCAA. The school's men's basketball team, coached by Rob Ehsan, plays in 8,508-seat Bartow Arena.

The men's basketball program's first coach was Gene Bartow, who was John Wooden's successor at UCLA. Bartow left UCLA after several exceptional seasons (52-9 over three seasons, including a berth in the Final Four in 1976) to head up the founding of the first UAB men's basketball team. He served as the school's first head basketball coach and athletic director for 18 years. Bartow led UAB to the NIT in the program's second year of existence, and followed that with seven straight NCAA Tournament appearances, including trips to the Sweet 16 in 1981 and the Elite Eight in 1982. Bartow retired from coaching in 1996. On January 25, 1997, UAB renamed its basketball venue, Bartow Arena, in his honor. Bartow continued to support the university as an influential booster and advisor until his death in January 2012. In 39 years UAB has made 14 NCAA tournament appearances (3 Sweet Sixteen appearances; 1 Elite Eight appearance) and 12 NIT appearances (2 NIT Final Four appearances), has had 33 winning seasons, of which 23 of those were 20+ wins seasons.

On December 2, 2014 UAB announced it was discontinuing its football program immediately along with the women's bowling and rifle teams at the end of their respective seasons. It was also announced that a men's Cross Country team would be created to maintain NCAA Division I requirements. This announcement met much resistance and an unprecedented flood of community support. On June 1, 2015 UAB announced the three programs reinstatement. The women's rifle team resumed in the Fall of 2015. The bowling team recommenced in 2016 and the football team retook the field on September 2, 2017 at Legion Field against Alabama A&M. With the resumption of these programs, the plan to add Men's Cross Country was dropped.

Science, Media and the Arts