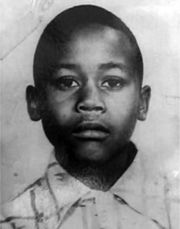 Virgil Lamar Ware (born December 6, 1949; died September 15, 1963) was shot in the chest and face while riding on the handlebars of his brother's bicycle on Docena-Sandusky Road on the afternoon following the bombing of the 16th Street Baptist Church. His killer was teenager Larry Joe Sims.

Ware was the third of six children born to James and Lorene Ware, residents of Pratt City. Mr Ware was a miner employed at the Docena mine nearby. Lorene worked as a cleaning woman. Virgil, then a student at Sandusky Elementary School, played tight end for his 8th grade football team. He also helped deliver coal for extra money and enjoyed singing at St Luke Missionary Baptist Church in Pratt City. He was planning to go to college to study to become a lawyer. He and his brothers Melvin and James had just secured a newspaper delivery route soon before he died.

Virgil rode with James to their uncle's scrapyard near Docena that Sunday to look for a bicycle they could fix up to split the route. They did not find one, and were riding back to their house just after 5:00 P.M. when Sims, riding with his friend Michael Lee Farley, and holding Farley's new .22 revolver, closed his eyes and fired a few shots to "scare" the boys. Virgil was hit in the chest and cheek and died from his wounds.

Farley and Sims had earlier attended an anti-integration rally at the Dixie Speedway during which Farley's pastor, Ferrell Griswold, denounced the bombing, but asserted the State's right to preserve segregation. An effigy of Bobby Kennedy, then-Attorney General, was burned at the rally. Afterward, Farley and Sims heard about a white teen, Dennis Robertson, who was nearly killed by a brick thrown by a black teenager during the day. They claimed to have been warned by friends that two boys on a bicycle were throwing rocks at whites, and Farley claimed to have seen rocks in their hands as they approached on his motor scooter. Farley handed Sims his revolver and Sims fired, holding the gun in his left hand. They drove off with Sims thinking he may have hit Ware in the leg, so they asked a friend to hide the gun.

A description of "two white boys on a red motorbike" went out over police radio. Mountain Brook police officer Paul Couch was driving through Forestdale and came up behind two boys riding such a bike and noted the plate number. He passed the tip to Sheriff's detectives E. Dan Jordan and J. A. McAlpine, who were working the case. The tip led them to Farley. Another informant connected Farley and Sims to the shooting. The next day the two boys were questioned separately in their homes. Farley denied involvement, but Sims confessed in tears, and claimed that he did not intend to hit the boys.

The two were arrested that day and both were charged with first-degree murder. Sims was convicted on the lesser charge of second-degree manslaughter -- the same charge to which Farley later pleaded. Judge Wallace Gibson suspended their sentences and gave them two years' probation for their "lapse". Both men later apologized to the Ware family and asked for forgiveness.

In the 1990s U. S. District Judge Willie James Ware, a Birmingham native then on the bench in San Jose, California, claimed that he had been inspired to pursue justice when his brother Virgil was shot off the handlebars of his bicycle. It was quickly revealed that Judge Ware was not Virgil's brother. After admitting to the lie, he withdrew his nomination to the Circuit Court and was publicly reprimanded by the Judicial Council of the Northern District Court of California.

On May 6, 2004 Ware's remains were disinterred from an unmarked roadside grave and moved to Carver Memorial Gardens on Minor Parkway where a bronze marker was erected. The ceremony was organized with the cooperation of the Civil Rights Activist Committee and included a procession of 16 white limousines and a high school choir. Fred Shuttlesworth spoke on the subject of redemption during the service. A section of Eutaw Street near the Ware's home was also rededicated in his memory. He was inducted into the Birmingham Gallery of Distinguished Citizens in 2011.