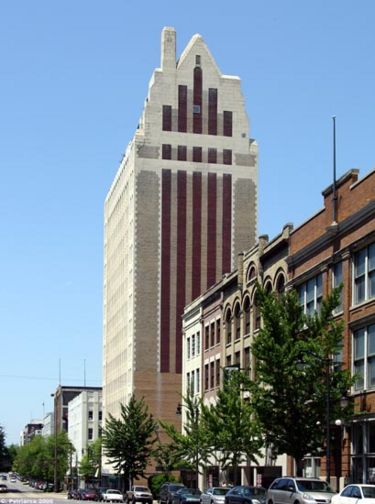 The Watts Building is a 236 foot tall, 17 story Art Deco apartment building located on the northwest corner of 3rd Avenue North and 20th Street in downtown Birmingham. It was built in 1928 by Thomas Haynes Watts III, who had built an earlier four-story Watts Building on the same site in 1888.

Watts commissioned the design of the tower from architects Warren, Knight & Davis. The new building would have space for as many as 300 offices and stores. The building is clad on the south and west (street) sides with cream-colored terra cotta in vertical bands with windows separated by brick spandrels. The north side is mainly brick with terra-cotta at the corners and ledges. The east side (rear) is unfenestrated, but graphically ornamented with large vertical bands of brick delineated by terra-cotta frames. Thick gables frame the pitched slate roof. Charles M. Allen and Son, which had also built the previous Watts Building, served as contractor and the construction cost was estimated at $1 million. 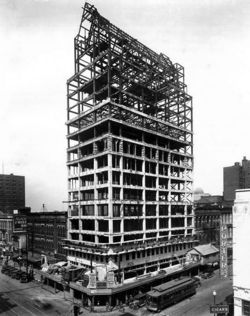 Photo of the tower under construction

In 1949 the building was acquired by the Southern Natural Gas Company for its headquarters offices. The transaction with Downtown Properties, Inc included the transfer of the vacant lot which formerly housed the Jefferson County Courthouse a block east at 21st Street and 3rd Avenue North. SONAT moved its headquarters to the new First National-Southern Natural Building in 1972.

In 1977 the exterior spandrels were obscured during renovations for the offices of Molton, Allen & Williams, a real-estate company. The building was added to the National Register of Historic Places in 1979.

In 1999 the upper floors were converted from office to residential use by the Cityscape Group, creating 34 loft apartments and refurbishing 30,000 square feet of commercial leased space. The cost of the renovation, including a new 16-story aluminum fire-escape stair, was $6.1 million. A later phase added 18 more residential units to the building.

In 2006 an attorney and resident of the Watts Building, Sandra Gregory was abducted from the adjacent parking lot in view of witnesses and a closed-circuit video camera. The ensuing search riveted the news media for the remainder of the day. She was rescued by police at a Homewood motel that same evening. In April 2012 an automobile collision pushed a car into the wall of the Watts Building.