10th Street South is a north-south street now divided into two sections in Birmingham's Southside community. Prior to the construction of Interstate 65, the two sections were connected.

On the west side of this section, all property north of 5th Avenue is owned by UAB and Southland International Trucks. UAB's property previously belonged to Alagasco, but when that company began building a replacement for their Downtown Operations Center, UAB purchased the property for use as a parking lot. The university is leasing the property back to Alagasco until the new Metro Operations Center is completed in 2015.

The southern section, in the Glen Iris neighborhood, also extends approximately one-quarter mile for roughly four blocks from 9th Court South to 16th Street South. The discrepancy in street numbers is because this section of 10th Street is where a section of streets aligned with the downtown street grid meets a section aligned along the compass. The short section of 10th between 8th Street and 10th Avenue is one-way north. Traffic traveling south must come from 8th Street. 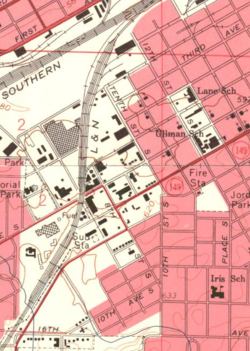 10th Street South before construction of I-65
Map section courtesy of the U.S. Geological Survey.

Originally, 10th Street South extended all the way from 2nd to 16th Avenue South. It was aligned with the downtown street grid from 2nd to 8th Avenues and due north-south from 8th to 16th. The intersection at 8th did not precisely align; instead the northern section was slightly east of the southern one at 8th. U.S. Geological Survey maps show the section of 10th Street between I-65 and 9th Court still in existence in the late 1980s.

For an alphabetical list of locations, see the 10th Street South category.