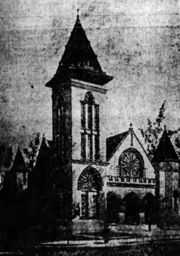 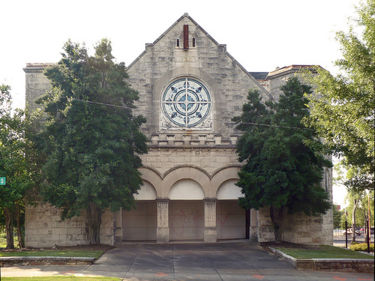 The 11th Avenue United Methodist Church, located on the northeast corner of 12th Street and 11th Avenue South was one of three churches built in the same neighborhood of Southside in the early 20th century. Along with 2nd Presbyterian Church and St Andrew's Episcopal Church, the three served the growing southwest area of Birmingham as the city's population was spreading out from the old downtown.

The church met in a frame building before constructing a $25,000 gray stone building in 1904, while W. E. Morris was pastor. Like many United Methodist Churches, 11th Avenue UMC was built of heavy stone, "for the ages". A tall belltower on the corner and turret roof on the opposite side of the narthex were either never completed or later removed.

Changing demographics and the development of UAB meant that many congregants had moved away from the area, but, as late as the early 1970s, the church was committed to remaining in place and reaching out to its neighbors with day care and evening educational classes. The size of the congregation, however, dwindled to the point that, in the 1990s the church closed its doors and sold the building to HealthSouth. The remaining members founded Aldersgate United Methodist Church in Oxmoor Valley. The Southside building was boarded up and remained vacant.

UAB acquired the property when it purchased HealthSouth's southside hospital in April 2006. Former Birmingham City Council member John Katopodis claimed that the building had been promised to him, but UAB took possession after a settlement was reached.

In December, 2006 UAB officials made plans to re-roof the deteriorating structure to help preserve its condition for possible future re-use. In 2008 the roof was found to still be caving in and the university had made no decision about future use of the property. In February 2009 UAB announced that it would demolish the building in order to construct a parking deck adjacent to its planned UAB Art Institute. Demolition took place in August 2009.