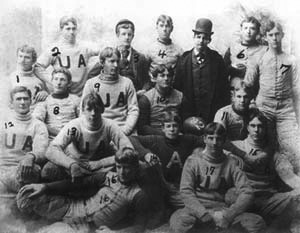 The 1892 Crimson Tide football team was the first football team to play for the University of Alabama. Interest in the game was spurred by student William G. Little, a Livingston native who learned to play football at the Phillips Exeter Academy in New Hampshire.

Playing their first year of varsity football in Tuscaloosa, Alabama earned a 2-2 record under coach Eugene Beaumont, who did not return. Members of the team included William Bankhead, later the 47th Speaker of the House, and Bibb Graves, later Governor of Alabama. Observers referred to the team as "The Cadets", "The Crimson White", or "The Varsity".