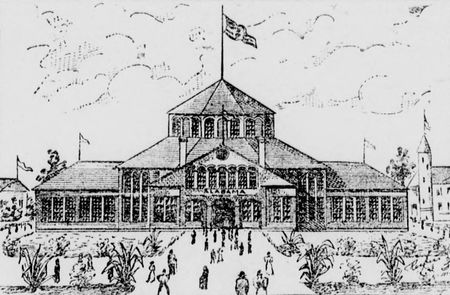 The "Alabama Building" at the 1895 Cotton States and International Exposition

The Commercial Club of Birmingham called for a meeting of the Alabama Commercial Association on April 2, 1895 to discuss plans for the exposition. F. Y. Anderson was elected to chair the board of managers for the project. Early negotiations with the Southern Railway to support the project stalled, but an agreement was reached before June. Charles Wheelock & Son were commissioned to produce an architectural design for a free-standing "Alabama Building", which would be located on high ground at the northern edge of the exposition grounds, near the U.S. Government building.

Wheelock's design called for an octagonal structure 80 feet across, surmounted by a 50-foot-high dome. Two 32-foot square wings extended the frontage to 144 feet and providing 7,500 square feet of exhibition space. A 34-foot deep entrance hall with offices and restrooms was entered through a 12-foot-deep covered portico. a 20-foot wide second-floor gallery around the central octagon added 3,500 square feet of floor area, for a total of 11,000 square feet of exhibit space.