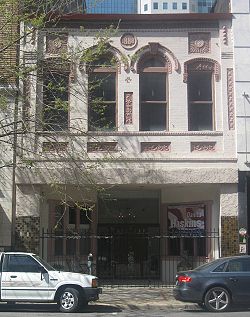 The building was developed by William Rushton Sr and features elaborate molding on the second story. It has served as a grocery, a mortuary, and a shoe store. In 1959, building owner Jobe-Rose jewelers hired architect Lawrence Whitten to remodel it. He designed a modern facade for the upper portion of the building that covered the molding. Some decades later, the facade was removed and the original molding restored.