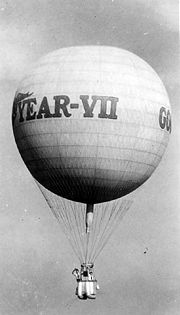 The 1934 National Balloon Race was a balloon event which launched from Legion Field at 9:30 PM on Sunday, July 29, 1934. Originally scheduled for Saturday July 28, the event was postponed 24 hours due to heavy rains. Six teams of registered balloonists, operating bags of up to 80,000 cubic feet, vied for a $1,750 cash purse and for the P. W. Litchfield trophy, donated by and named for the president of Goodyear. The three winning teams were those who managed to travel the furthest from Birmingham before landing. The balloon entered by the U. S. Navy won the competition by traveling 206.4 miles to Commerce, Georgia.

The event, organized by the Naitonal Aeronautic Association under the direction of Major Ray Cooper, was sponsored locally by The Birmingham Post, with proceeds from the sale of tickets and boxes being donated to the Crippled Children's Clinic. Participating teams included one from Goodyear, two from the U. S. Army, one from the Navy, one sponsored by the Buffalo Courier-Express from New York, and one owned by Henry Hansen of Chicago, Illinois. About 6,000 people attended the launch. Birmingham Aero Club president Asa Rountree Jr served as referee.

The evening launch was the first for the annual contest, which began in 1909. Members of the American Legion assisted the balloon teams as they filled their bags from a common supply of coal gas and prepared to launch. Flood lighting allowed for visibility in the stadium, and two massive military searchlights followed the entrants as they drifted into the skies toward the Northeast.

During the day before the launch, thousands of miniature balloons were released containing the names of individual sponsors. The finder and sponsor of the small balloon found the furthest away from the stadium were given a prize. Speakers used loud-speaker equipment to introduce the teams and related descriptions from previous contests.

All the balloons landed in central Georgia on August 1. The top three winners went on to represent the United States in the international competition for the James Gordon Bennett Trophy, launching from Warsaw, Poland on September 20.