Conservative Southern delegates to the Democratic convention were increasingly disturbed by the national party's commitment to New Deal programs, including labor reforms and policies aimed at protecting Civil Rights and pursuing political equality across racial lines. Among their grievances was a federal judge's 1944 order in Smith v. Allwright barring state political parties from holding "white only" primary elections. The decision had encouraged hundreds of thousands of black residents to register to vote for the first time. Legislatures in Deep South states quickly responded with new voting restrictions intended to undermine the effect of the ruling. Proposals by President Truman to abolish poll taxes, enforce anti-discrimination laws in hiring, and to make lynching a federal crime, were also perceived as threats to white supremacy and "state's rights"

In advance of the May 1948 primary election, Alabama Democratic Party chair Gessner McCorvey asked all candidates for presidential elector to sign a pledge to vote against any candidate committed to the party's Civil Rights platform.

A large group of Southern delegates walked out of the convention in Philadelphia after it adopted a platform supporting the Civil Rights policies of President Truman. Minneapolis mayor Hubert Humphrey called for the party to "get out of the shadow of states' rights and walk forthrightly into the bright sunshine of human rights." During his speech, Mississippi governor Fielding Wright led his state's 23 delegates out of the convention hall. Leven Ellis and 13 of Alabama's 26 delegates also walked out, followed by a large number of delegates from other Southern states. These individuals were later referred to as "Walkouters," and were cheered during the Dixiecrat convention. Those who remained, including George Wallace, were called "loyalists" by the Democratic party. Their votes were not enough to prevent Truman from earning the party's nomination for a full term as president. 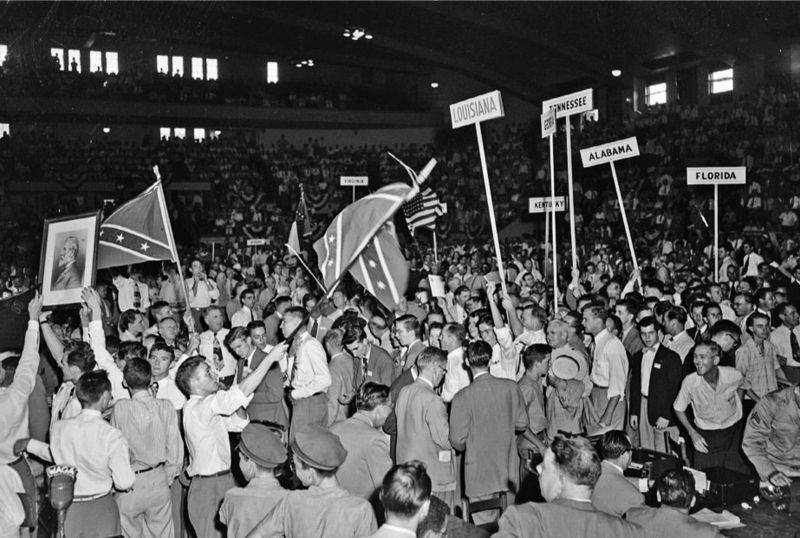 View of Municipal Auditorium during the convention. Photograph by Marion Johnson

About 6,000 people from thirteen states attended the States' Rights Democrats' convention at Birmingham's Municipal Auditorium on July 17. In addition to the Walkouters and other state party officials, southern schools, including Birmingham-Southern College, formed ad-hoc "delegations" to participate in the convention. These groups, in particular, led rousing cheers when the names of Jefferson Davis and Robert E. Lee were mentioned and waved Confederate flags and sang along to choruses of "Dixie" and other Southern hymns. A group of protesters, carrying signs for Progressive Party candidate Henry Wallace, were shouted down. 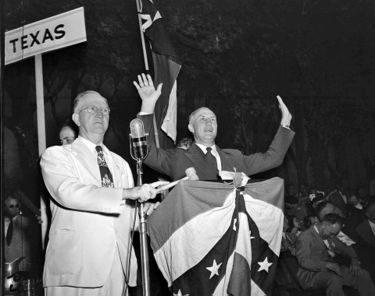 The aim of the Dixiecrats was to lock up the South's 127 electoral votes, preventing either Truman or Thomas Dewey from winning a majority in the 1948 general election. It was believed that the Southern delegation in the U.S. House of Representatives carried enough influence to force the Democratic Party to drop its Civil Rights platform in order to put Truman in office. To that end, the convention nominated South Carolina governor Strom Thurmand for President and Mississippi governor Fielding Wright for vice-president.

The convention adopted a platform specifically opposing the anti-discrimination, anti-lynching and anti-poll tax planks of the Democratic platform. They also pledged to uphold racial segregation and to promote white supremacy. In accordance with their pledge, Alabama's eleven electors gave their votes to the Dixiecrat ticket. In other states the support of Democratic electors was less than unanimous. Thurmond carried Alabama, South Carolina, Mississippi and Louisiana (states where they appeared on the ballot as the only Democratic candidates), but those 37 electoral votes fell fall short of what was needed to produce a deadlock. Even without those states, Truman was able to secure 303 electoral votes on November 2 to win the presidential election outright.

The "loyalist" Alabama Democratic Party resumed control of the primary process in Alabama in 1950, but the Dixiecrat party survived in the White Citizens Councils and other political organizations devoted to maintaining white political supremacy and opposing efforts to extend Civil Rights to African Americans. Many of these efforts were framed as "states' rights" matters, and continued to influence Democratic Party politics in the South.