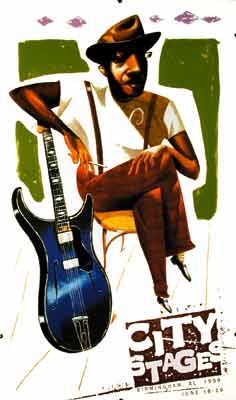 The 1999 City Stages was the 11th annual edition of "Birmingham's World-Class Music Festival". It was held the weekend of June 18-20, 1999, in and around Linn Park. The festival had 250 acts on 15 stages between 5th Avenue North and 8th Avenue North.

Weekend passes were sold in advance at Ticketlink outlets, Blockbuster video stores, AmSouth Bank branches and Bruno's supermarkets for $25. Day passes were $18 at the gate. Attendees who brought non-perishable food items to donate to the United Way Community Food Bank were rewarded with a souvenir button.

A set of seven Epiphone "batwing" guitars, each signed by a festival headliner, was auctioned off to benefit the City Stages Scholarship Fund. An eighth signed guitar was given away by raffle.

In addition to reserved wheelchair viewing areas and sign language interpretation for the hearing impaired, the festival arranged for tactile maps and accessible telecommunications devices.