1st Avenue South (originally called Avenue A) is an east-west avenue in Birmingham running from I-65 in the west to Roebuck in the east. In the downtown area it is just south of Powell Avenue and one block from the Railroad Reservation. As it proceeds eastward it is interrupted by I-20/59 near Gate City and resumes in Woodlawn separated from 1st Avenue North by Division Avenue. It is once again interrupted by I-59 at 82nd Street South in East Lake and then terminates at 87th Street South just shy of Parkway East near the Roebuck Municipal Golf Course 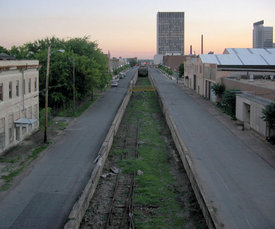 The 1st Avenue Cut, looking west from the 24th Street Viaduct in 2005

The 1st Avenue Cut is a depressed railroad bed which formerly served the Seaboard Air Line Railroad, which runs through the center of 1st Avenue South, below grade, from 20th Street South to 24th Street South. The reinforced concrete construction creating the grade separation was begun in the mid-1890s.

The presentation of the City Center Master Plan in 2005 showed the possibility of filling the cut to create a tree-lined boulevard. Some residents, vocally represented by then-City Councilor Elias Hendricks, expressed their view that the cut should be preserved for its interpretive and nostalgic value, but "cleaned up" to make it an asset to the area. The Central City neighborhood sponsored a clean-up day for the cut in June, 2005.

In 2016 the Rotary Club of Birmingham partnered with the city of Birmingham, Freshwater Land Trust, Operation New Birmingham and the Railroad Park Foundation to redevelop The cut as a linear public park, known as the "Rotary Trail". The park is part of the Red Rock Ridge and Valley Trail System, connecting Railroad Park with Sloss Furnaces and beyond.

Moving east from the 24th Street viaduct the street is home to recent construction on the former Seaboard Air Line Railroad yard and spillover from the adjacent "Design District" around Dr Pepper Place in Lakeview. The 24th Street viaduct and Red Mountain Expressway overpass occasionally shelter small groups of homeless persons. The CSX 32nd Street Yard was active on the south side of the street until 2012. Until then it had often provided a staging area for the Ringling Bros & Barnum & Bailey's Circus train.

The area around the western ends of the railyards served as Birmingham's Red Light District in the early 20th century.

According to a 1909 report by Mayor George Ward the policy of "Segregation" had a positive effect:

"It has reduced the number of unfortunates in our midst over 75 per cent by driving hundreds away. It has reclaimed every other section of the city from suspicion and contamination. It has made it possible for women and children to go and be seen in every other part of the city at all times without fear of being misunderstood or embarassed. It has done more to prevent thievery, debauchery, and murder; more to prevent insidious temptation; more to reduce licentiousness, incipient and chronic, than can ever by known by the public or the authorities. This district should be regulated sternly; treated fairly; kept in the background, and conditions improved from year to year."1.

The best known house in the district was operated by Blanche Bernard who, banned from soliciting at the Terminal Station instead offered gentlemen a free carriage to their hotel. The catch was that even if their hotel was located just down 5th Avenue North, the carriage would always tarry around the Southside Loop to show off the attractions of the Red Light District. The houses were finally razed in the 1930s.

On the relatively isolated stretch between 35th and 41st Streets there is frequent drag racing in the late evenings. Past 41st Street, 1st Avenue peters out into a local-access street.

Georgia Road forks away to the south at 58th Street. The avenue continues underneath I-20 into East Lake and continues through 20 blocks of predominantly residential areas until it is again interrupted by I-59 a few blocks shy of its eastern end at 87th Street.

For an alphabetical list of locations, see the 1st Avenue South category. 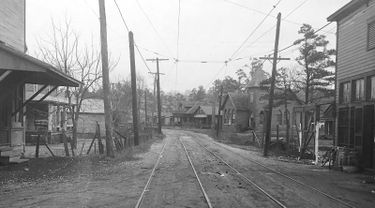