This article is about the accident inside the airport terminal. For the fatal aviation accident, see 2013 Airport Highlands plane crash.

The 2013 Birmingham airport fatality was an incident which occurred in the newly-renovated terminal of the Birmingham-Shuttlesworth International Airport on March 22, 2013. One of four newly-installed "multi-user flight information displays", cabinets holding display monitors, fell forward onto four members of the Bresette family of Overland Park, Kansas during a layover in Birmingham en route from Florida.

The airport's $201 million terminal modernization opened on March 13. The display, located in the pre-security area near the Southwest Airlines ticketing counter, crashed to the floor at about 1:30 PM on March 22. Heather Bresette and three of her children were pinned underneath while her husband was uninjured. Bystanders rushed to lift the cabinet, estimated to weigh 300 to 400 pounds, off of the family as emergency officials rushed to the scene. Mrs Bresette was treated at UAB Hospital while her three children were taken to Children's Hospital. Luke Bresette, 10, was pronounced dead at 2:26 PM. 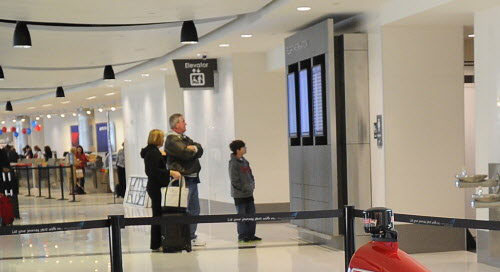 The flight information display cabinet that fell over, pictured here in a March 13, 2013 photo by Birmingham News photographer Joe Songer

No specific individual, firm, or group was assigned or immediately accepted responsibility for the oversight that resulted in the tragedy.

The display cabinets were part of the architectural design provided to the Birmingham Airport Authority by KPS Group, Inc., the architects of record for the terminal modernization project. As construction managers and general contractors for the project, the joint venture of Brasfield & Gorrie and BLOC Global Services Group were contracted to perform the work.

They subcontracted the fabrication of the display cabinets to Fish Construction of Stafford, Texas, a firm specializing in airport millwork, which fabricated the cabinets as components and shipped them to Birmingham for assembly and installation. Monumental Contracting Services was originally hired by Fish Construction to perform that installation, but, in the event, Brasfield & Gorrie's own personnel completed the majority of the work.

Some discussion arose about the whether additional anchoring should be installed, and there was communication regarding the stability of the cabinets between Monumental and Fish and between B&G/Monumental and KPS Group. According to B&G, Fish indicated in their initial response to concerns raised by Monumental that the units were designed to be freestanding. According to a statement released by Fish, they were the ones that brought up concerns about anchoring the cabinets. In any case, no definitive change was made to the design documents as a result of those conversations. Brasfield & Gorrie did provide some blocking and anchors for three of the four cabinets, but not for the one that fell.

Albert Osorio, one of the bystanders who helped lift the display, told the media that it appeared to have been adhered to the wall with "liquid nails", a trade name for a caulk-like adhesive. No subsequent reference to adhesive has been reported.

In early May, the Birmingham News detailed the progress of their investigation of design and construction documents released to them by the Airport Authority. They revealed that the flight display cabinets had undergone design changes before installation, and that those changes added weight to the front panels of the cabinets and added a toe-kick, reducing the depth of the base. Brasfield & Gorrie and KPS Group both approved the shop drawings that showed those changes before the cabinets were fabricated. Additional documentation of discussions between the fabricator, installers and designers regarding stability of the cabinets and the need for anchors or bracing, has not been released to the media.

In March 2016 Fox 6 received various witness statements from the Transportation Security Administration in response to a Freedom of Information Act request that Shannon Maze had filed three years earlier. Among the statements was one, from TSA officer Joseph Ricciardi, in which he said he had seen two boys climbing on the flight display, standing on the base rail and holding onto the cabinet, shortly before the accident. No one present reported seeing the boys climbing on the cabinet at the time that if fell. TSA manager LaShawn Hampton accompanied the family to UAB Hospital.

The Bresette family filed a negligent wrongful death lawsuit against the architects and contractors involved in the design, fabrication and installation of the flight display cabinets. The Airport Authority was not named as a defendant. A trial date was set for November 3, 2014 before Jefferson County Circuit Court Judge Tom King.

In October, 2013, plaintiffs attorneys requested, based on their own investigation, that Khafra Engineering Consultants, which partnered with KPS Group in a joint venture to provide architectural design services, should be released from the lawsuit. King granted the request.

In February 2014, testimony attached to a motion to dismiss Monumental Contracting from the lawsuit indicated that their workers became concerned about the stability of the cabinets during assembly of the first unit for Concourse A on January 7 and performed no further work after that date on any of the MUFIDs, including the one in the terminal that fell on Like Bresette. According to sworn depositions, foreman Josh Aaron notified Monumental executive Chris Swain that the cabinets were not stable without some form of anchor. Swain then contacted Fish Construction, BLOC Global and Brasfield & Gorrie by email. A project manager for Fish Construction responded that the cabinets were designed to be freestanding. Aaron replied later that day by arguing that the MUFIDs were clearly not stable without anchors. Fish forwarded the communication to KPS Group and Monumental instructed their workers to lay the cabinet on the floor and discontinue assembly until the matter was resolved. Brasfield & Gorrie "took control" of the partially-assembled cabinet and the three unassembled MUFIDs that evening. Based on that filing, the plaintiffs filed their own motion to dismiss Monumental from the suit, and Judge King agreed. A. G. Gaston Construction and Saber Construction, which were hired as program managers and consultants, were likewise dismissed from the suit in April.

The airport observed a 30-second moment of silence in Bresette's memory on March 22, 2014.

A settlement between the family and the remaining defendants (BLOC Global, Brasfield & Gorrie, KPS Group and Fish Construction) was announced following a pre-trial hearing on September 3, 2014. The terms of the settlement were not disclosed. In a statement, plaintiff's attorney, Tim Dollar, credited the defendants and their counsel for cooperating in investigative efforts and remaining committed to reaching a fair resolution. He stated that "each defendant has acknowledged that mistakes were made and have accepted responsibility for their respective roles that contributed to the tragedy," and also reported that, "each defendant has [...] agreed to make concrete changes to ensure that similar tragedies are avoided in the future." In addition, Dollar announced that the Airport Authority would commission a memorial to Luke intended to "celebrate [...] a young life," and serve as a reminder of, "the need to treasure each day with one another." A bronze plaque was dedicated on February 3, 2016.

Luke's father, Ryan Bressette also made a statement after the hearing, which was attended by the entire family. He expressed his appreciation for the support and well-wishes from Birminghamians, and for the professionalism and consideration from all parties involved which made possible their legal goal of determining responsibility and helping other families avoid the same loss. He expressed that Luke believed in forgiveness, and pledged his family would focus on promoting their "Live Like Luke" foundation to "encourage young people to be the best they can be."