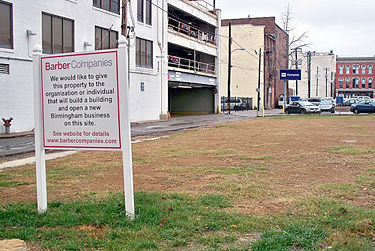 The vacant lot in December 2011

209-211 21st Street North or, more properly, 209-211 Richard Arrington Jr Boulevard North, is a 4,000 square-foot parcel (Lot 11) located on Block 84 in downtown Birmingham on the east side of 21st Street adjoining 2nd Alley North, across the alley from the Jackson Building and across the street from the City Federal Building.

In the early 1890s the property, divided in two parcels, was owned by George Lunsford and his wife Susan. In 1892 George constructed the five story Lunsford Building, which he operated as the Lunsford Hotel. In 1894 the hotel became the first home of the Birmingham Medical College, a predecessor to UAB.

The hotel was operating in the 1930s as the Milner Hotel, with an office supply company on the ground floor. Later, with the upper floors removed, it was renovated as a two-story building that at one point housed a Dr Scholl's Foot Comfort Shop. 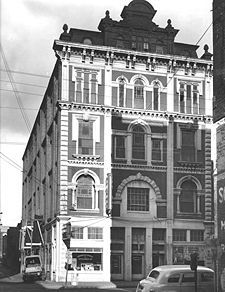 Former Barber Dairy president George Barber purchased the property in the 1990s. In 2009 he had the existing building on the site demolished. In September of that year he offered the property for free to anyone pledging to construct a business and occupy the site for a minimum of five years. The difficulty of securing financing caused several proposals to fall through, and in the meantime, the space was used as an informal dog park by downtown residents. In 2012 Barber struck a deal with law student Harris Stewart to construct the Trim Tab Brewhouse on the lot.

In May 2013 members of the the Greater Birmingham Food Truck Coalition began using the gravel-covered lot as a semi-permanent Food Truck Lot.