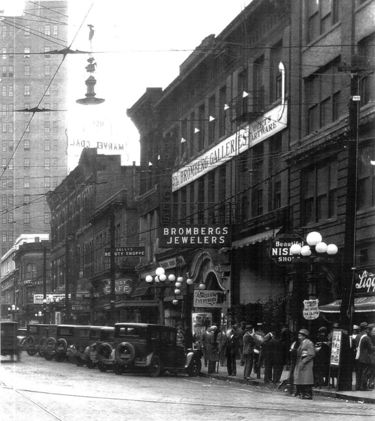 214 – 216 20th Street North is a circa-1905 3-story, 7-bay red-brick building located between 2nd Avenue North and 3rd Avenue North on the west side of 20th Street North, between the Iron Age Building and a complementary 3-bay building at 218 20th Street North. The building features 2 ground-level store fronts. The upper floors of the building were opened to the neighboring 218 building in 1920 for Bromberg's Galleries furniture and housewares showrooms. The retailer moved to their own building across the street in 1946.

The building was purchased in 2015 by Harsha Hatti, who had previously restored the 218 building. He re-opened the upper floors as offices for his CoreLinQ Innovations in 2015. He further expanded into the Iron Age Building at 212 20th Street North in 2016 as part of the "Iron Age Project" healthcare technology business incubator.