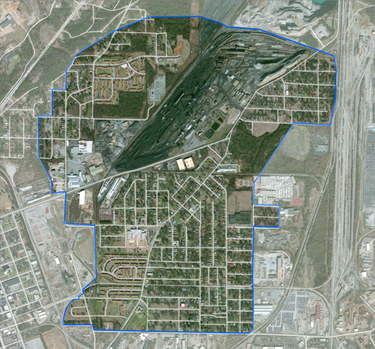 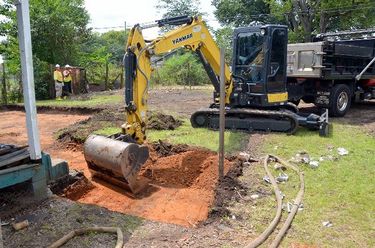 The 35th Avenue Superfund Site is a federally-designated area encompassing parts of the Collegeville, Harriman Park and Fairmont neighborhoods in the vicinity of 35th Avenue North. The U.S. Environmental Protection Agency determined in 2012 that high levels of soil pollution made the area eligible for access to a large fund (the "Superfund") of federal money earmarked by the Comprehensive Environmental Response, Compensation, and Liability Act of 1980 for clean-up of highly-contaminated areas.

Neighborhood leaders, such as Maxine Parker, led early efforts to draw attention to the possibility that residents' health was being negatively affected by industrial pollution.

Soil sampling conducted by Walter Coke in 2011 identified unhealthy levels of toxic pollutants including arsenic, lead, and Benzo[a]pyrene, a hydrocarbon produced during combustion. The EPA responded to the reports and initially referred to the investigation as the Walter Coke Site. It was later renamed because of the other plants that likely contributed to the pollution. The agency identified two coke oven plants, asphalt batch plants, pipe manufacturing facilities, steel producing facilities, quarries, a coal gas holder and purification system facility, and the Birmingham-Shuttlesworth International Airport as potential contributors to soil pollution resulting from airborne contaminants as well as contamination of Five Mile Creek. Investigators later learned that residential developers used slag from industrial suppliers to raise low-lying flood-prone lots. There were 3,585 residents living in the affected area at the time of the 2010 census, almost all of them African-American. 589 were children under the age of seven.

Along with soil testing and investigation, the EPA has worked with the Jefferson County Department of Heath and the U.S. Health Department's Agency for Toxic Substances and Disease Registry to test residents' blood for lead poisoning and other adverse health conditions attributable to environmental pollutants. The ATSDR's report, released in August 2015, detailed the levels of contaminants present in soil samples it received and recommended that the EPA proceed with remediation efforts while also advising residents about ways to limit exposure. The County Health Department's analysis failed to find a statistically significant pattern when comparing samples from the Superfund area to data from demographically similar populations outside the area.

Clean-up efforts conducted under the EPA's supervision have focused on removal and replacement of contaminated topsoils. Rick Jardine has served as the agency's On-Scene Coordinator. As of April 2017 approximately 30,000 tons of soil had been removed from 280 properties, while another 235 parcels have been identified as eligible for clean-up. That effort is expected to continue through 2020 at an estimated total accrued cost of around $20 million.

In May 2020 work was continuing with precautions in place due to the 2020 Coronavirus pandemic. At that time, 1,970 of 2000 residential lots in the superfund area had been surveyed for contaminants and 658 had been identified for remediation. 494 of those had been remediated, along with three schools and two public housing communities, at a cost of $28 million. Work was expected to be completed by 2023.

On September 20, 2013 the EPA notified the following businesses that they were being considered as "potentially responsible parties".

That designation and the legal liabilities that it entails have been challenged by those businesses. Walter Coke alone has negotiated to participate in clean-up efforts, notably at Hudson K-8 School. Drummond Company, whose plant is located outside of the study area, has sued the EPA saying that it failed to provide its attorneys with public documents it requested.

In 2014 the EPA proposed to accelerate clean-up efforts by placing the site on its "National Priorities List". It based its proposal on the fact that the site scored a "50" on the agency's Hazard Ranking System, which weights the potential for pollution to affect human health. A score of 28.5 is usually considered high enough to merit placement on the list. Under that provision, the State of Alabama could be made responsible for shortfalls in assessments made to the businesses deemed responsible.

The listing was opposed by the Alabama Department of Environmental Management on the stated grounds that such a designation could harm property values and economic development opportunities in the affected neighborhoods. Then Alabama Attorney General Luther Strange wrote the EPA that. "The State of Alabama has been unmistakably clear that no State money will be expended to assist in any clean-up effort at the 35th Avenue Superfund site." After the Alabama Media Group obtained a copy of the 23-page letter, they noted evidence that it was apparently ghostwritten by employees of Balch & Bingham, a law firm representing businesses opposing the EPA's efforts.

Then State Representative Oliver Robinson also argued against the listing before the Alabama Environmental Management Commission. It was similarly opposed by the Jefferson County Commission, by U.S. Senators Richard Shelby and Jeff Sessions, and by U.S. Representative Gary Palmer. The site has not been not added to the National Priorities List.

State Representative Oliver Robinson's involvement was the subject of a criminal investigation led by United States Attorney Jay Town (a former campaign staffer for Luther Strange). In June 2017 Robinson agreed to plead guilty to accepting bribes, totaling $360,000, which were passed through an attorney at Balch & Bingham and a front group, the Alliance for Jobs and the Economy, to the Oliver Robinson Foundation, which employed Robinson's daughter, Amanda, and which was involved in encouraging residents in the Superfund site to resist the EPA. Robinson's plea was made contingent on his cooperation in the ongoing investigation. Attorneys Joel Gilbert and Steven McKinney, along with Drummond executive David Roberson, were all later charged with bribery. McKinney was dismissed from the trial by Judge Abdul Kallon. Gilbert and Roberson were convicted on all counts. Following the conviction Birmingham mayor Randall Woodfin wrote to the EPA arguing for the site's immediate placement on the National Priorities List.

Meanwhile, Jeff Sessions, who was involved in opposing the EPA's efforts to list the site on its National Priorities List, and whose election campaigns received major donations from Drummond and Balch & Bingham, was appointed to serve as Attorney General of the United States by President Donald Trump. In that role he now oversees the prosecution of cases against individuals employed by those companies, and has not stated whether he would recuse himself from any involvement. Meanwhile Heather McTeer-Toney, former EPA Region 4 administrator, has been replaced by former Alabama Department of Environmental Management director and industry lobbyist Trey Glenn. In his November 2017 financial disclosure form, Glenn reported income in excess of $5,000 from Balch & Bingham for "technical consulting for Drummond/ABC Coke project."

Furthermore, former Balch & Bingham attorney and Sessions staffer Jeff Wood was appointed as head of the Justice Department's Environment and Natural Resources Division. Wood has recused himself from matters relating to his former firm, but, until he left to become a deputy solicitor in the Department of the Interior, Brandon Middleton, another former Sessions staff member directly involved in opposing the EPA's proposed actions in North Birmingham, was Wood's deputy.