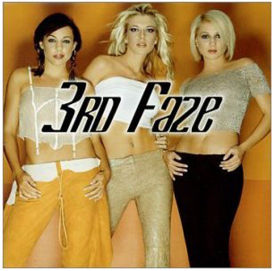 3rd Faze was an all-girl pop trio formed by HealthSouth CEO Richard Scrushy to perform on the "Go For It! Roadshow" touring show produced by the company. The idea of creating and promoting a pop group through the show was suggested by music producer Tim Coons, who added his own girl group, "Real" to a Go For It! show in Salt Lake City.

3rd Faze, made up of Halie Clark, Minia Corominas and Sara Marie Rauch, was created in September 2000 under a five-year agreement with Coons' Atlantic Music Company. Coons and his wife earned $1,650 per week to develop and manage the group. Each of the three girls was to receive a salary of $9,000 for their first year together, $12,000 for the second, and $15,000 for the third - seventh years of the contract. In addition, each member would receive an advance of $10,000 for the first album completed, $15,000 for the second, $20,000 for the fourth and fifth and $25,000 for the sixth and seventh.

The name, chosen by Coons, referred to the "3 phases" of life (past, present and future). On April 27, 2001 the trio signed a performance and recording contract with GFI Productions, the HealthSouth subsidiary which produced the Go For It! Roadshow. RDR Worth Music Publishing, a limited liability corporation formed by Scrushy, Don Perry and Ralph Stringer, acted as go-between.

3rd Faze released a self-titled album in September 2001 on the Edeltone label with the help of producers Desmond Child, Carl Sturgen and Evan Rogers. To celebrate its release, Richard and Leslie Scrushy bought each of the girls a diamond cross pendant.

While on tour the group was pampered, using HealthSouth-owned tour buses with private bunkrooms. When commercial flights to events were not available, the group flew on HealthSouth corporate jets. HealthSouth personnel acted as tour organizers, support and security staff for their events.

Most expenses were paid by HealthSouth through GFI Productions. In testimony for a civil trial in May 2009 attorneys alleged that Scrushy paid $40,000 in company funds for the trio to have breast augmentation surgery.

Scrushy often hosted the trio for weekends at his home on Lake Martin. He also accompanied them to the Grammy Awards ceremony in March 2002 where they were treated to a clothes shopping spree and were escorted to various record industry parties in their new Versace dresses. The band was signed to the Sony-owned Columbia label in 2002 after Sony Records CEO Tommy Mottola was granted 250,000 HealthSouth stock options by the company's board of directors.

In 2002 Scrushy bought out Coons' contract and assigned HealthSouth vice-president for marketing and communications Jason Hervey to manage the group. That summer 3rd Faze opened for O-Town and Britney Spears on tour and developed a small fan base of its own. They recorded four songs for Columbia produced by Rick Wake. Mattola's resignation from Sony led to the cancellation of the record deal.

HealthSouth's headquarters was raided by the FBI in March 2003 as part of an investigation into accounting fraud. A week later Hervey flew to Orlando to announce that the group was being disbanded.